In this 2017 Sustainability Report, you will find the difference one year makes in NC State’s goal of becoming a more sustainable university.

From growth in sustainable infrastructure on campus to new real-world sustainability experiences for students, this year’s efforts further integrate sustainability into the university’s mission of teaching, research, operations and outreach.

Our university community’s Think and Do spirit is turning ideas into action and contributing toward a more sustainable future for our community, state, nation and world.

Together, we are developing leaders and solutions for challenges impacting our environment, economy and society. 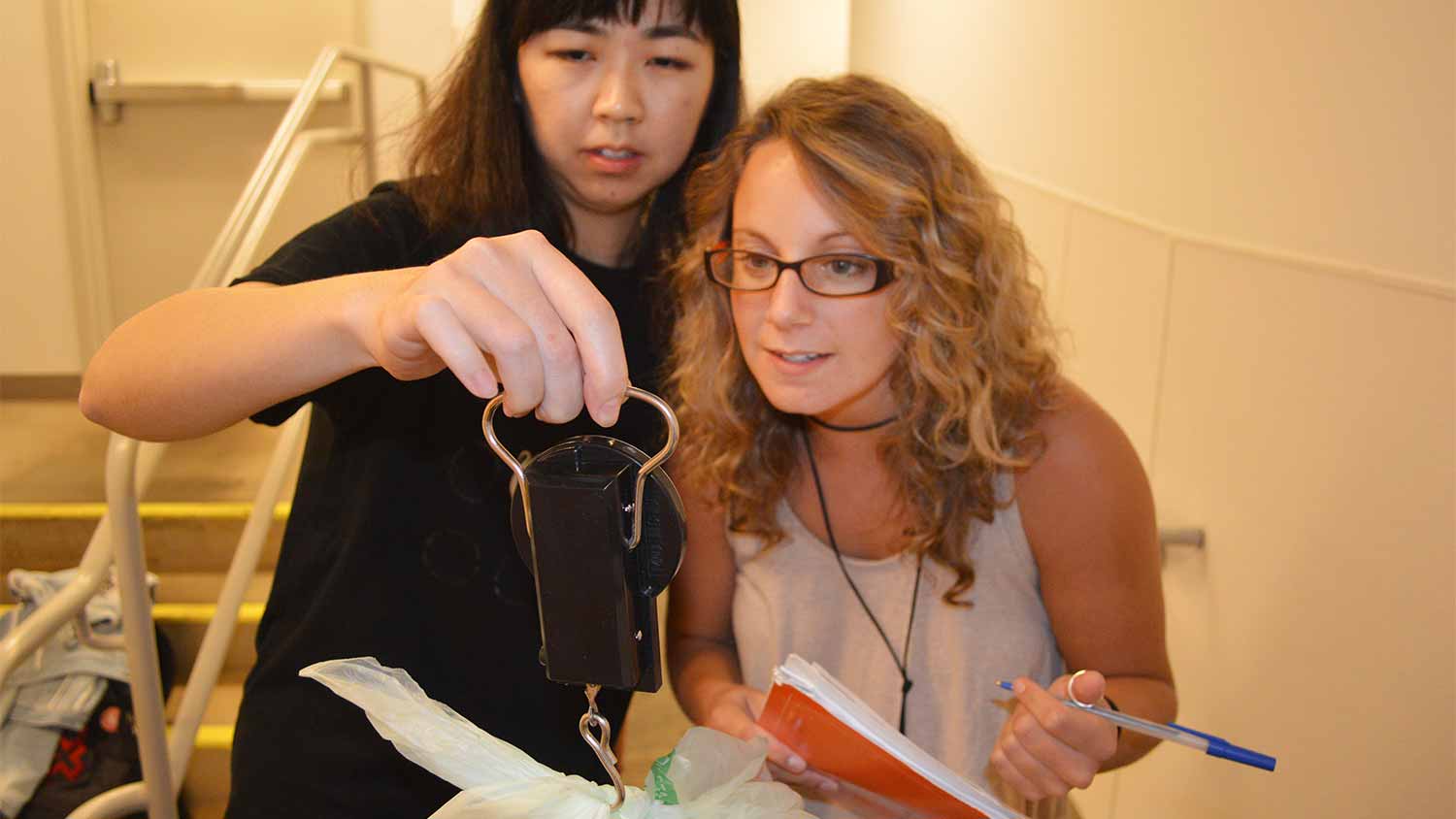 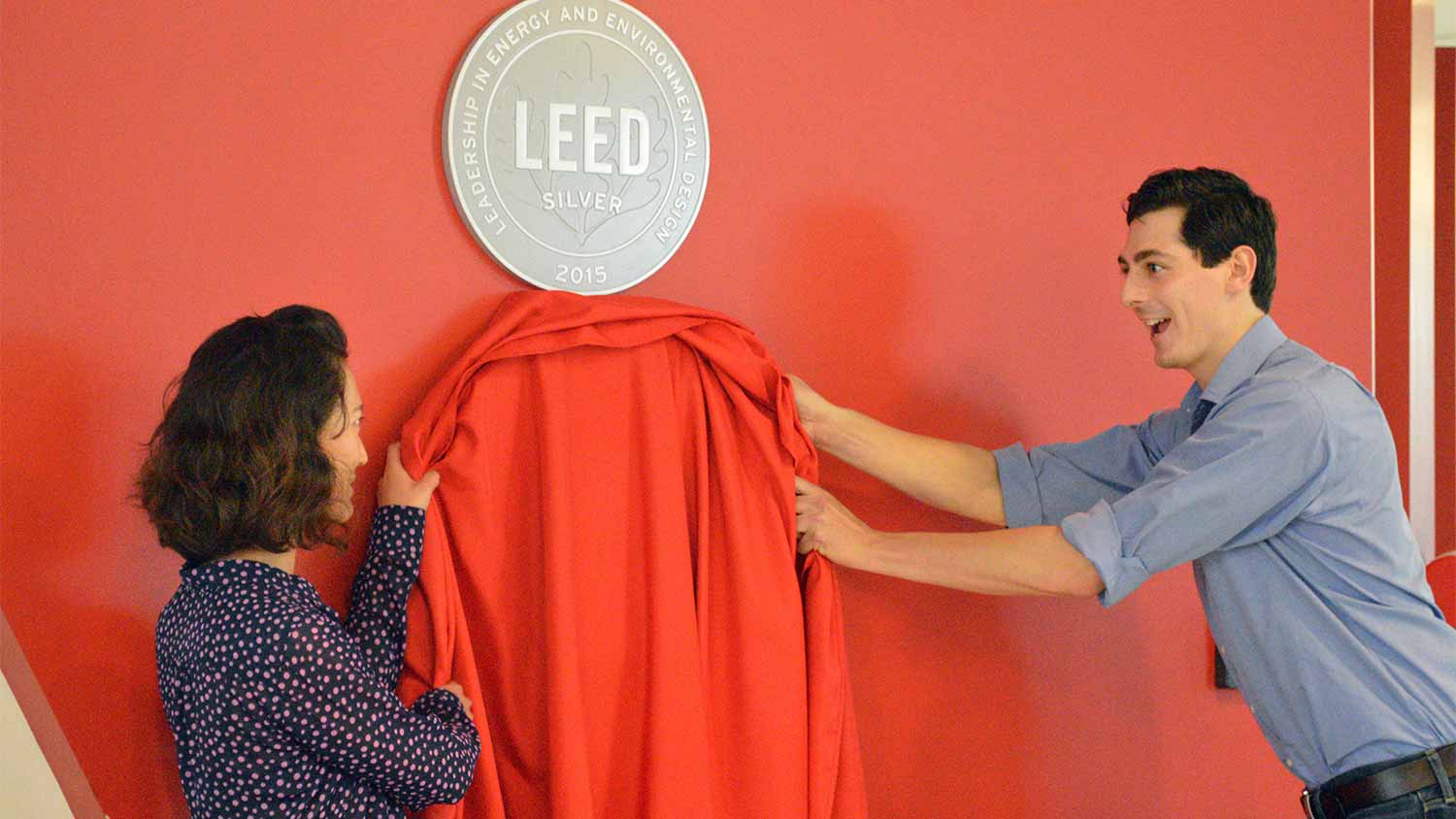 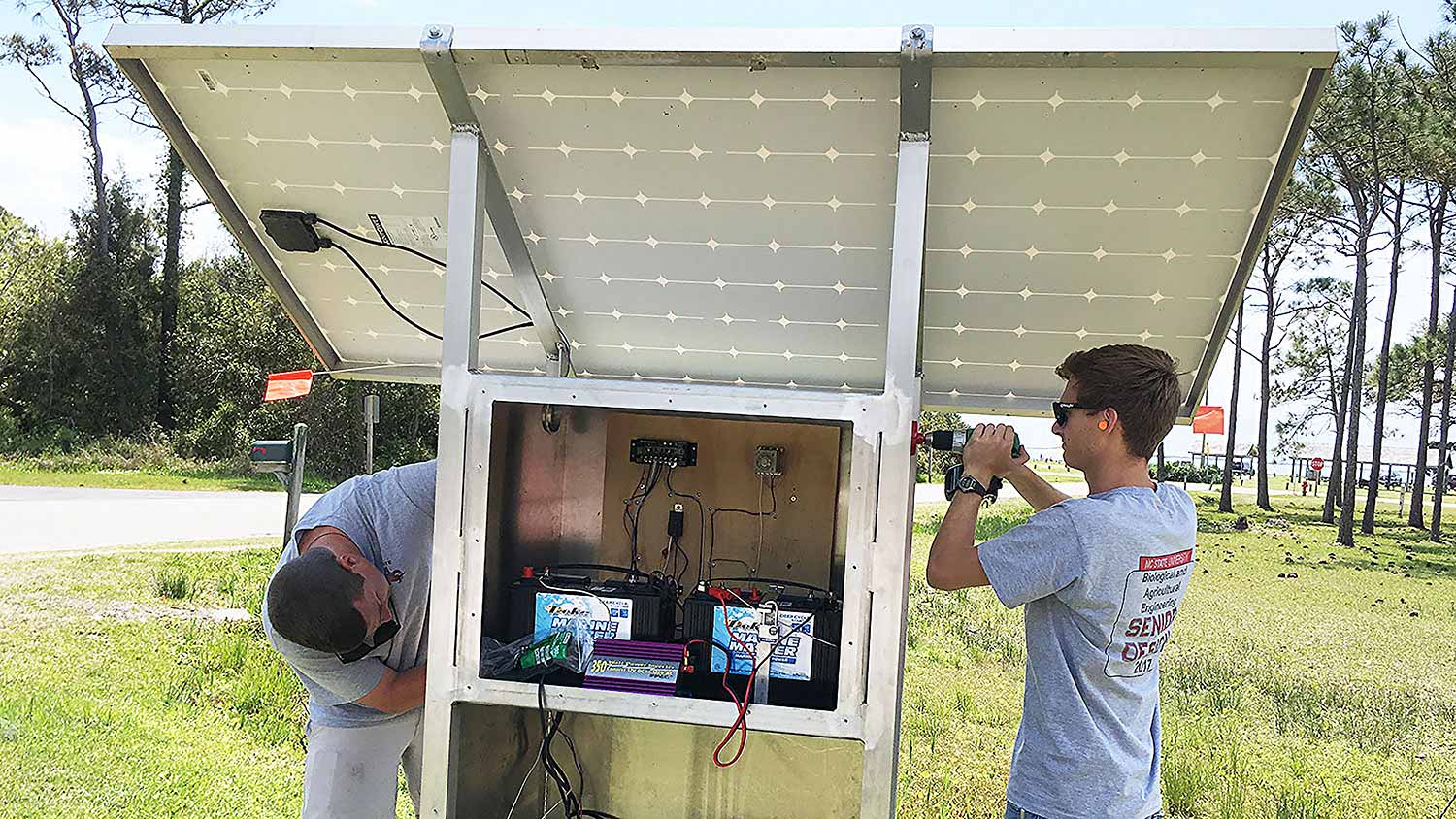 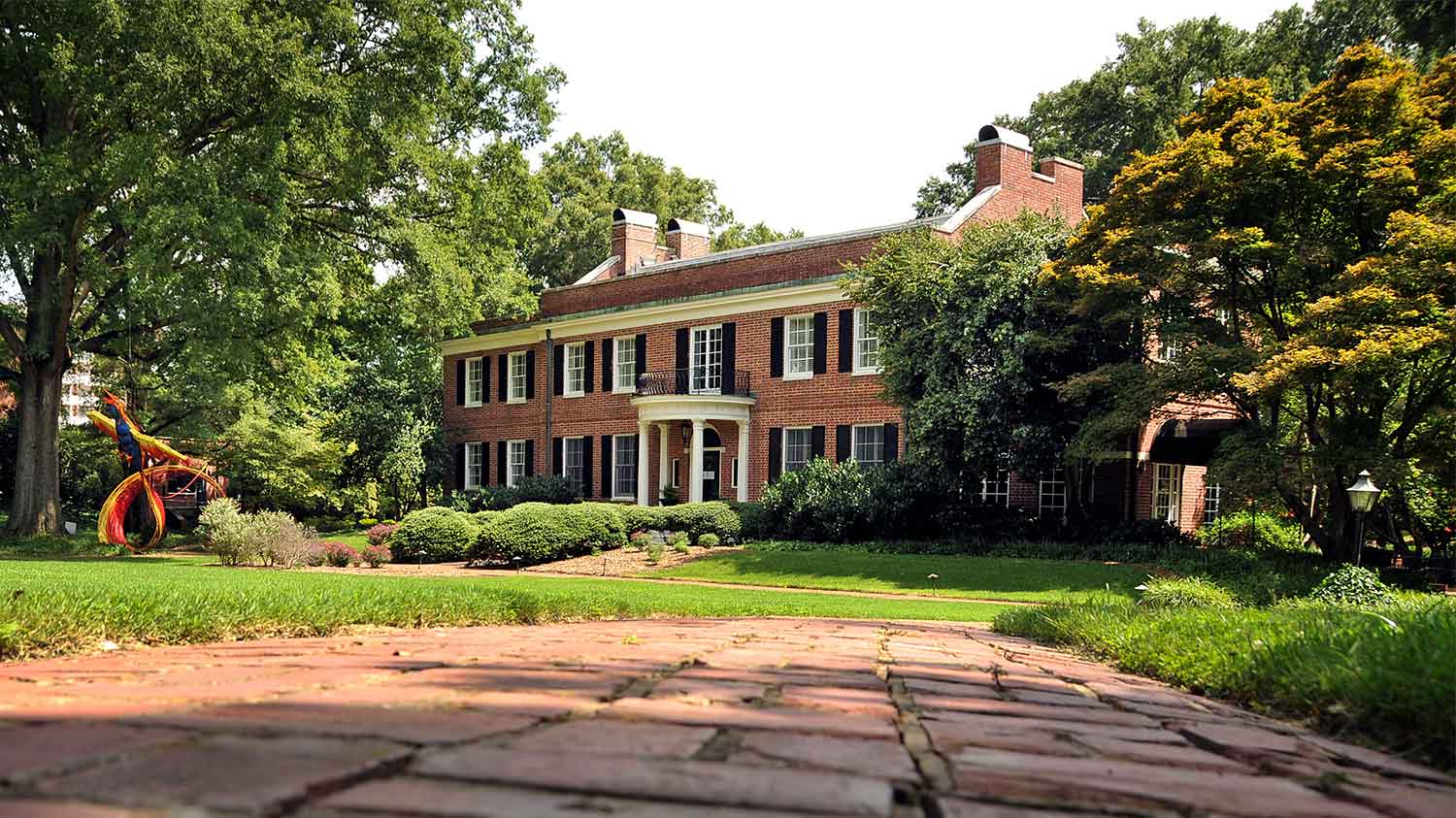 Horticulture students designed a pollinator garden at the newly-renovated Gregg Museum on campus. 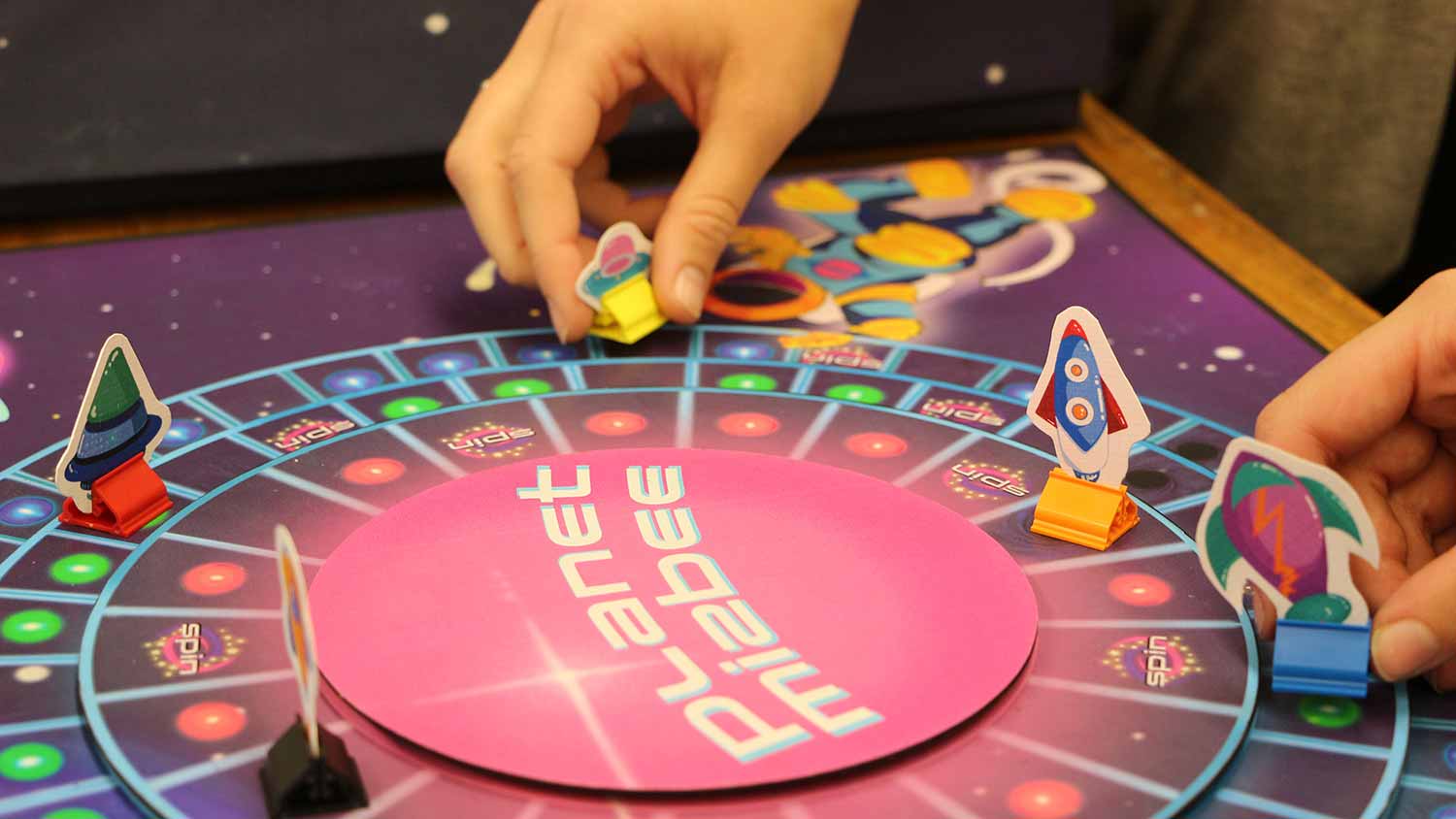 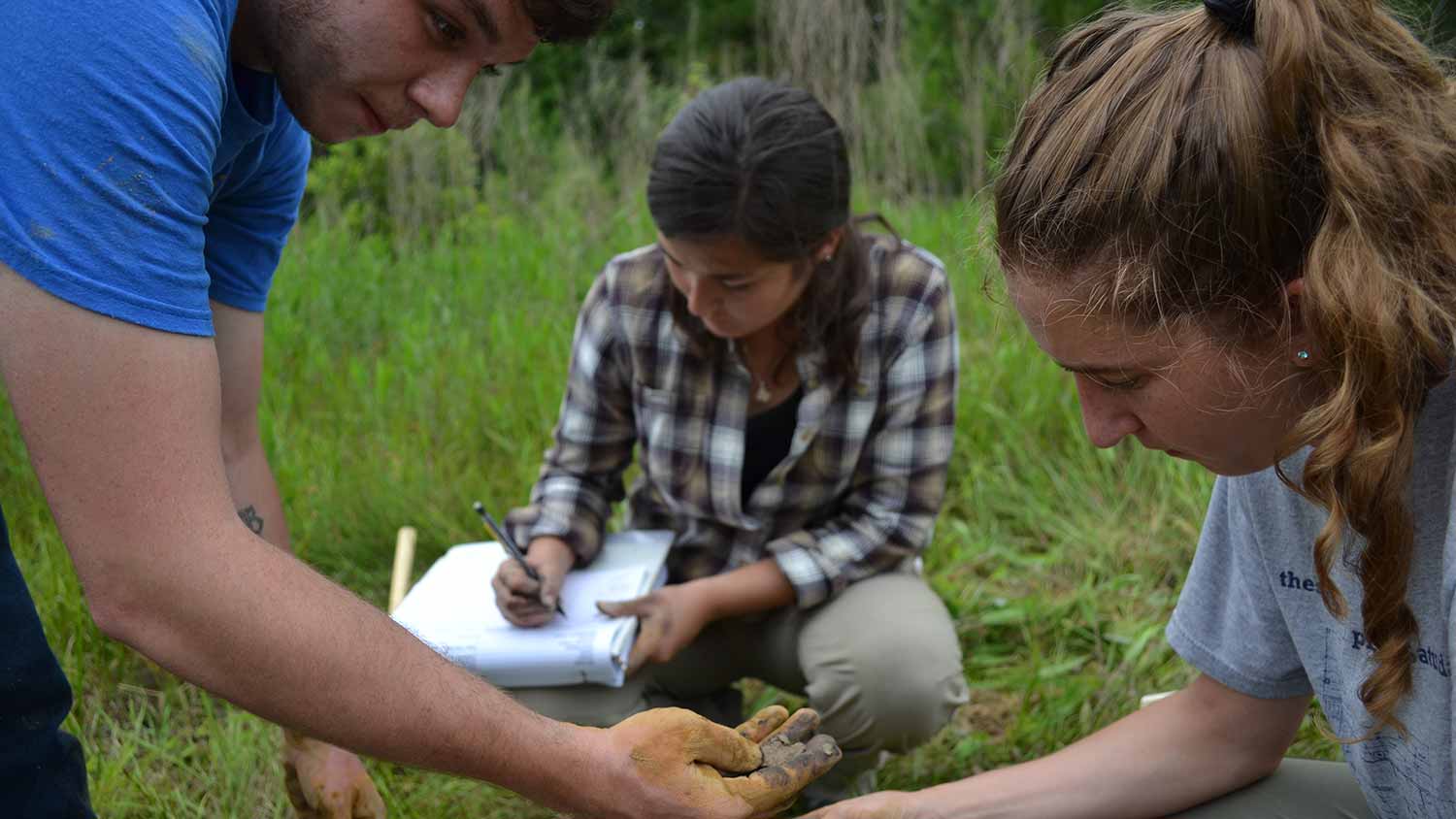 NC State received a three-year grant from the National Science Foundation to offer the only U.S. soils-related research experience for undergraduates.

Top 10 ranking in 2017 for the College of Natural Resources among U.S. colleges for studying natural resources and conservation.

14 members of the NC State community participated in a regional workshop about integrating sustainability into curriculum.

1st research symposium hosted by NC State’s Center for Human Health and the Environment on the toll heavy metals take on human health.

26 virtual reality field trip videos were created for introductory biology courses to enhance learning while eliminating the need to travel.

27 percent of Poole College of Management faculty have integrated sustainability into academic courses because of the college’s Business Sustainability Collaborative.

NC State researchers developed an inverter device with greater efficiency in a smaller, lighter package – which should improve the fuel-efficiency and range of hybrid and electric vehicles.

An in-depth study of Chicago neighborhoods in 2011 and 2015 suggests that parks and greenways could play a role in reducing crime, according to NC State research.

Cleaning contaminated sites can benefit the environment, but it can also benefit nearby property values, according to NC State research.

While advanced wood-burning cookstoves can provide benefits to the environment and climate, researchers found these bene- fits are less than expected due to higher emissions measured in the field compared to lab.

NC State researchers discovered how to determine the rate at which nitrate pollution makes its way from groundwater into streams, which may help predict long-term pollution in groundwater-fed streams.

250,000 N.C. residents impacted by the chemical GenX in the Cape Fear River, according to NC State research that uncovered the toxin’s presence in this major source of drinking water.

16 N.C. schools districts will work with the College of Education to redesign principal preparation programs as a way to improve education for children.

It wasn’t until I was there face-to-face with the family that I truly understood the degree of our work; we were changing the entire future of a family. 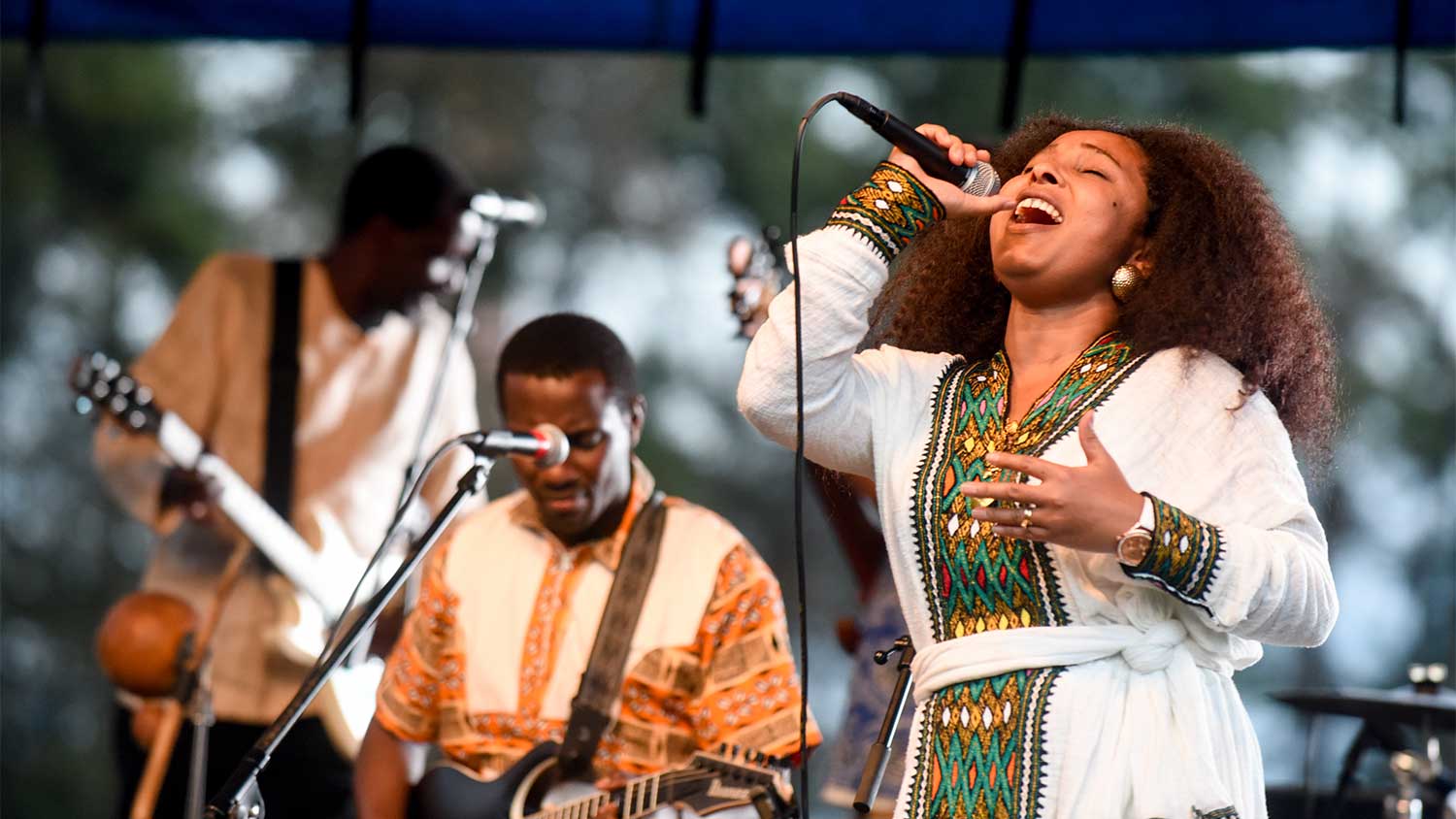 In March 2017, the Nile Project concert, featuring musicians from the Nile region of Africa, launched campus-wide dialogue and programming about social change and sustainability. The concert was one of several Arts NC State events featuring sustainability themes. 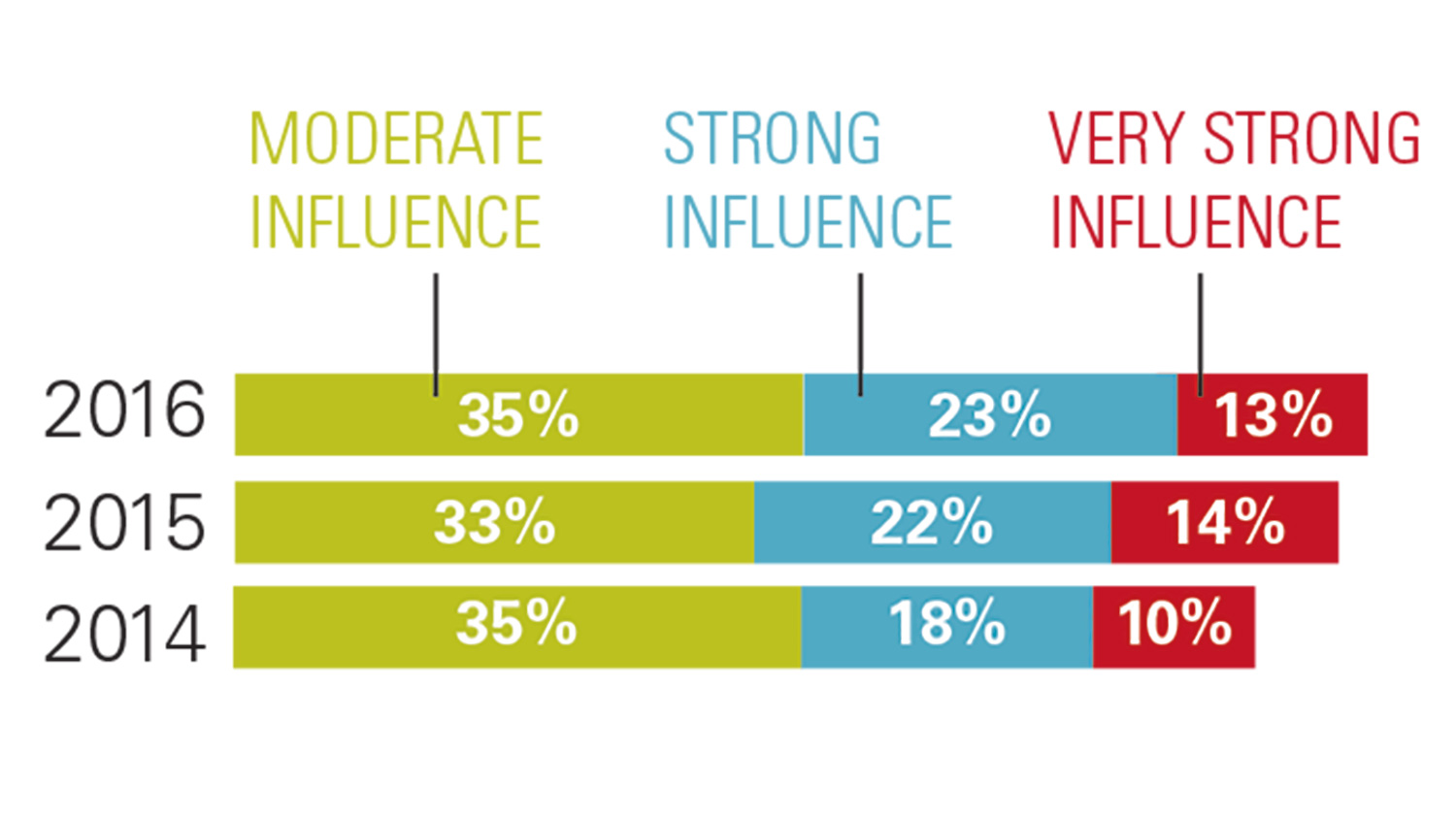 71% of incoming NC State students in 2016 indicated the university’s commitment to the environment and sustainability influenced their decision to attend NC State. 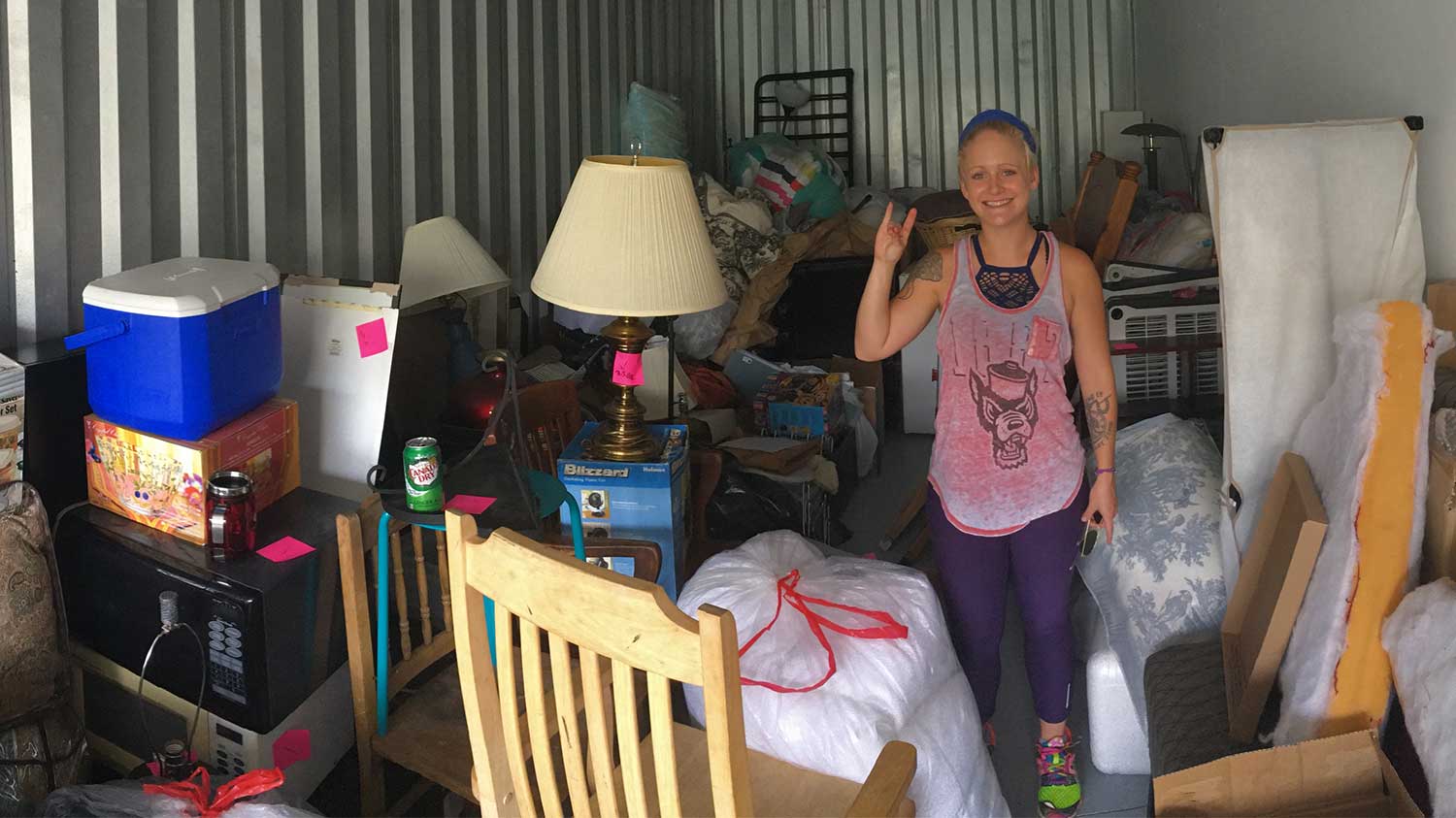 What if a program existed to connect under-resourced students with lightly used home furnishings that would otherwise go to local landfills? Then student Taylor Spoon received a grant from NC State’s Sustainability Fund to pilot Pack2Pack, which connected students with resources.

The village has made me what I am today. There is absolutely no doubt about it.

Mary Paz Alvarez Valverde, one of more than 250 NC State students who participated in EcoVillage living and learning community since its launch in 2013

The Wolfpack Citizen Science Challenge joined researchers and community members in placing camera traps across the natural landscape, recording hundreds of animals on campus and in the Raleigh area.

Thirteen sustainability projects will be implemented on campus in fiscal year 2018 thanks to $179,000 in grants from the NC State Sustainability Fund. 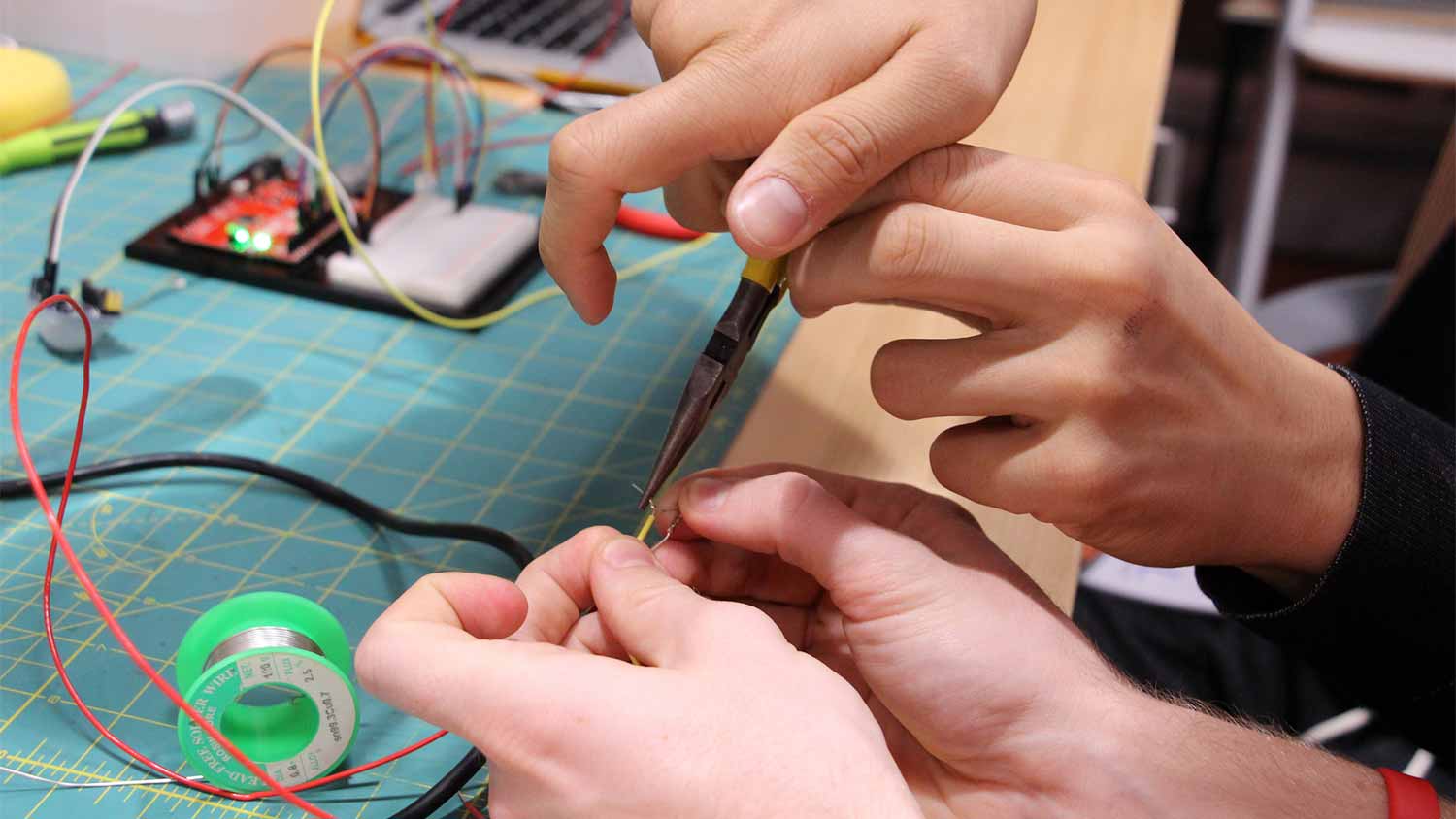 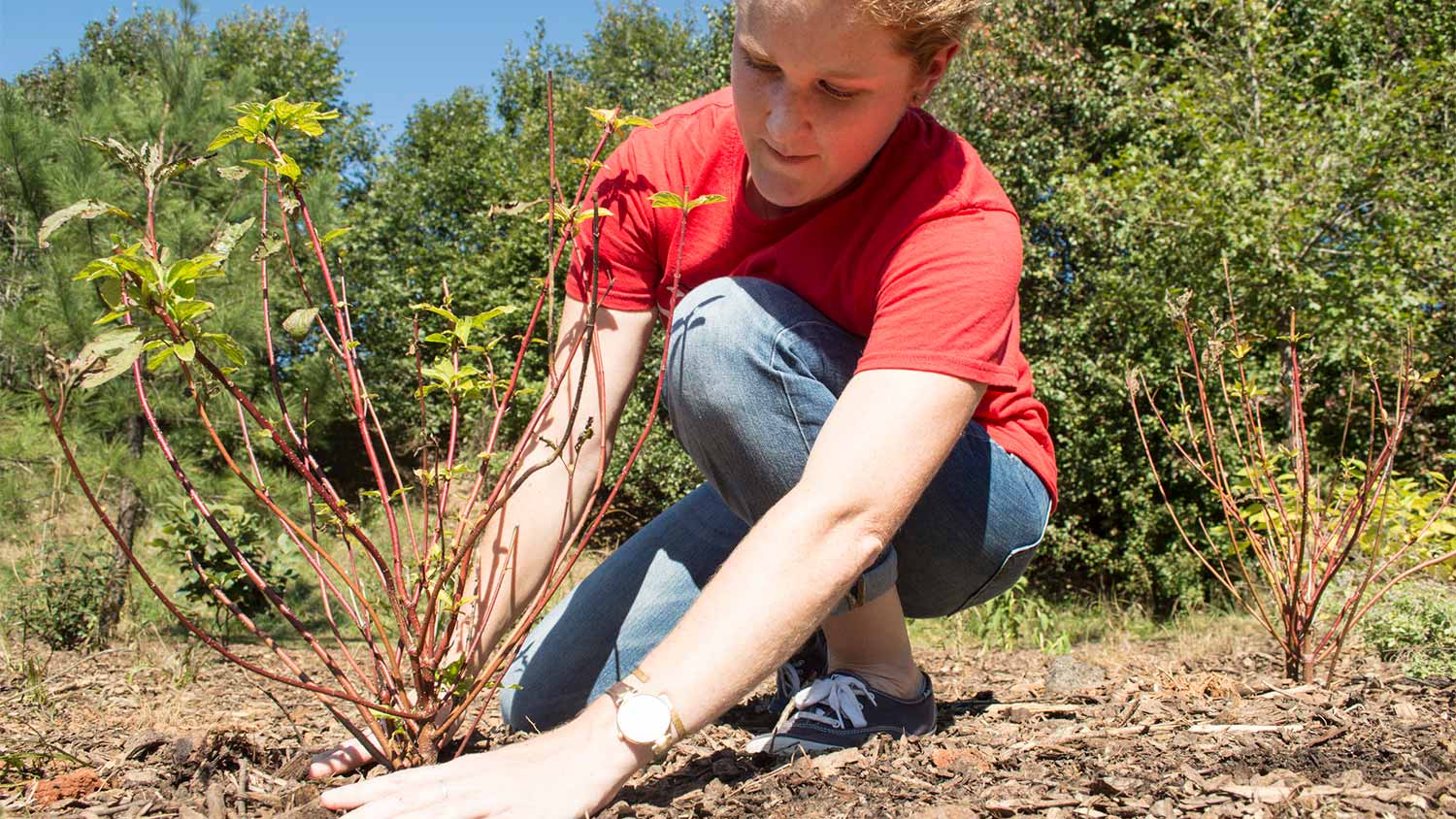 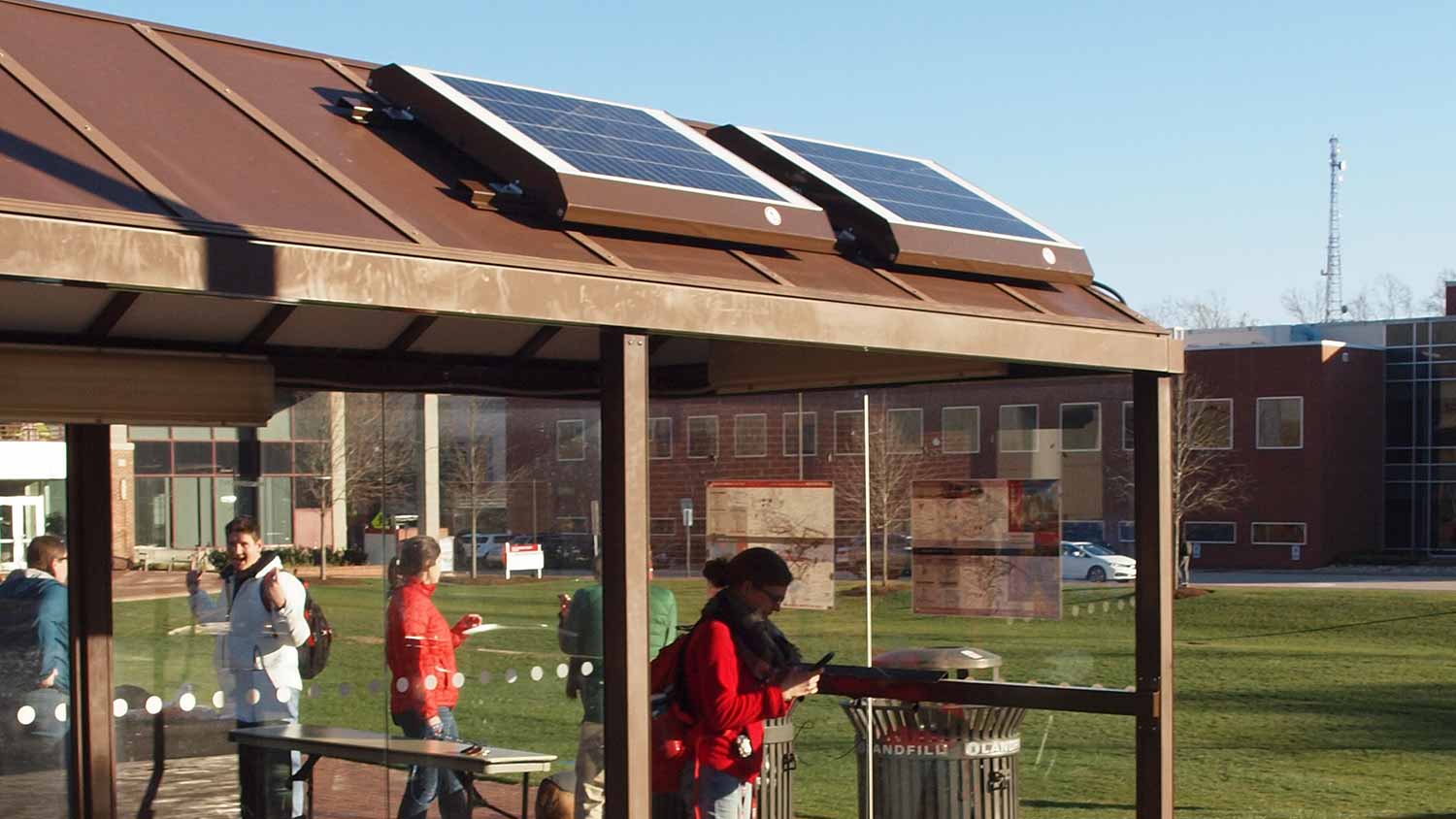 With funding from NC State’s Sustainability Fund, students coordinated the installation of a solar-powered charging station at a popular campus bus stop on Dan Allen Drive.

32,080 pounds of reusable material and 1,300 pounds of food were donated by students during residence hall move out. Donations went to a local nonprofit and the campus Feed The Pack food pantry.

700 students at a school in Sierra Leone received clean drinking water access in December 2016 due to the work of NC State’s Engineers Without Borders student chapter.

1st place went to NC State in an energy and water conservation competition versus Clemson University. Residents of the Tri-Towers residence halls most reduced utility use through this competition organized by the NC State Stewards student leaders.

Student Hanan “Alex” Hsain presented her award-winning sustainable energy research at the 2016 Appalachian Energy Summit. In 2017, she was named a Truman Scholar.

With a grant from NC State’s Sustainability Fund, students created a cotton composting program for cotton waste generated at the College of Textiles.

campus energy use reduction since 2003

campus water use reduction since 2002

of NC State Dining’s food purchases were from campus, local or regional sources.

of campus waste diverted from landfill through composting, recycling and reuse. 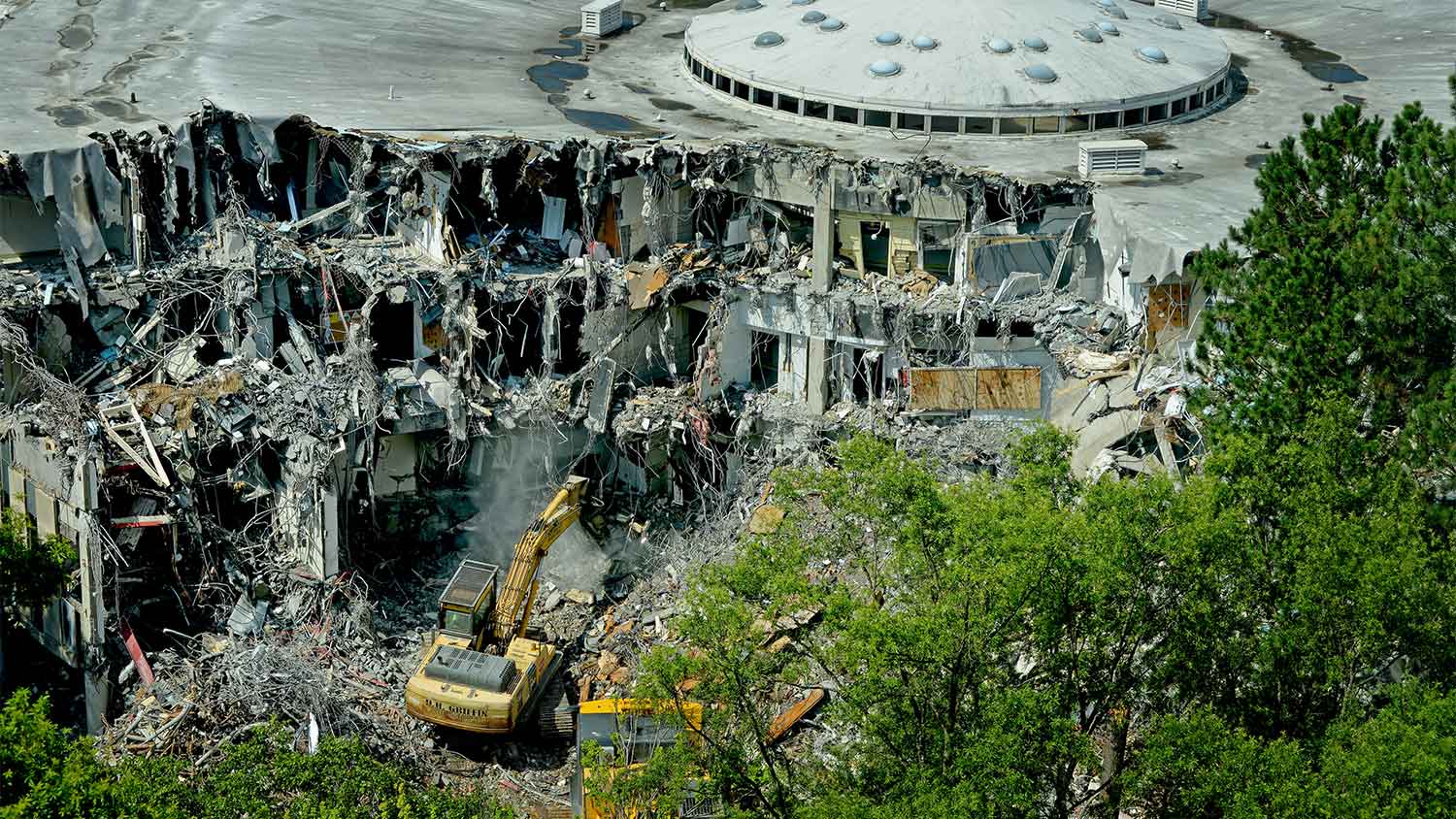 95% of Harrelson Hall’s non-hazardous materials and contents were recycled or salvaged during the university’s 2016-2017 deconstruction of the building. 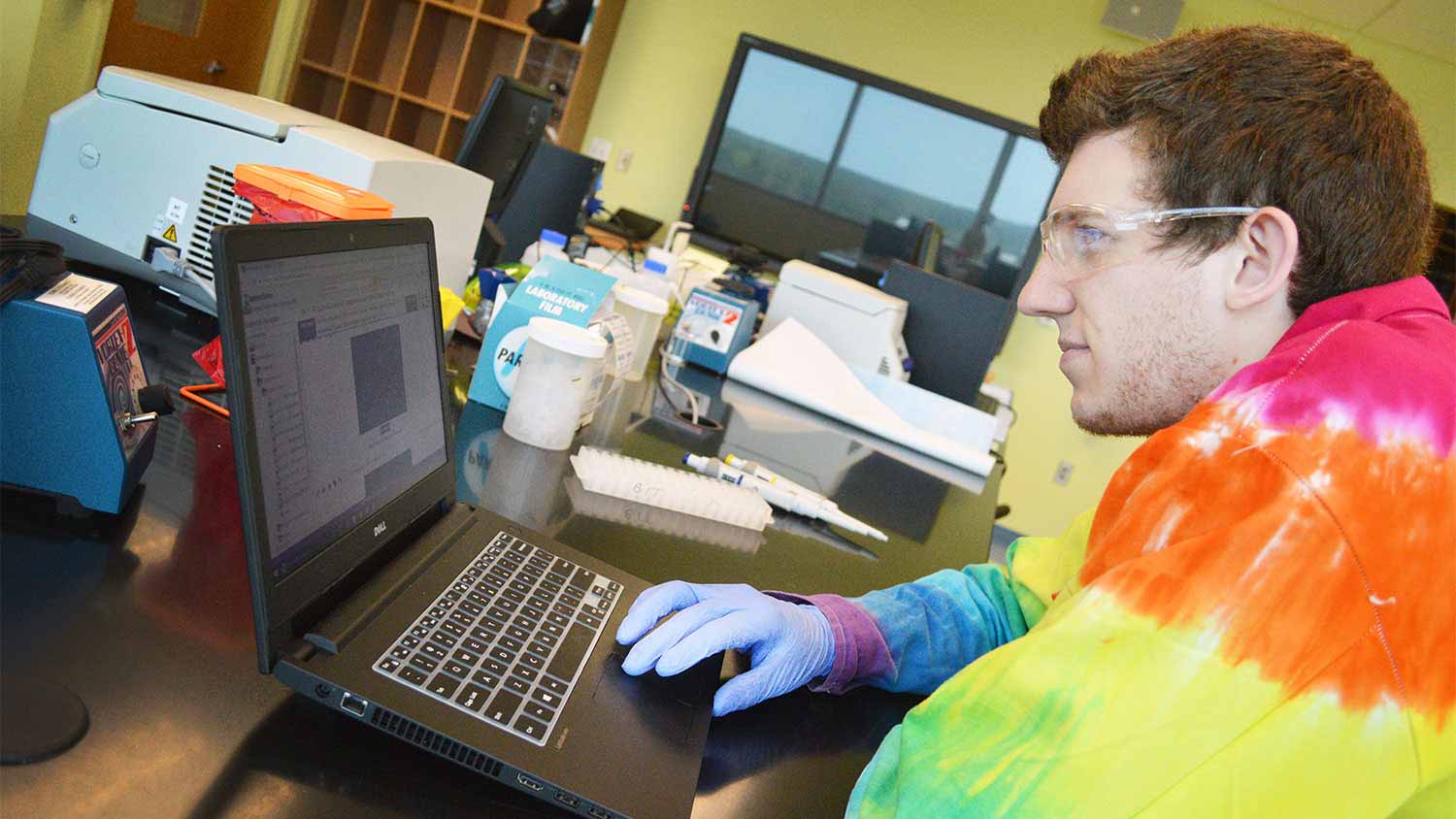 $30,000 in student textbook purchases were avoided in fall 2016 due to several biotechnology labs switching to electronic notebooks, which also improved the learning experience and saved 63,000 pages of paper. 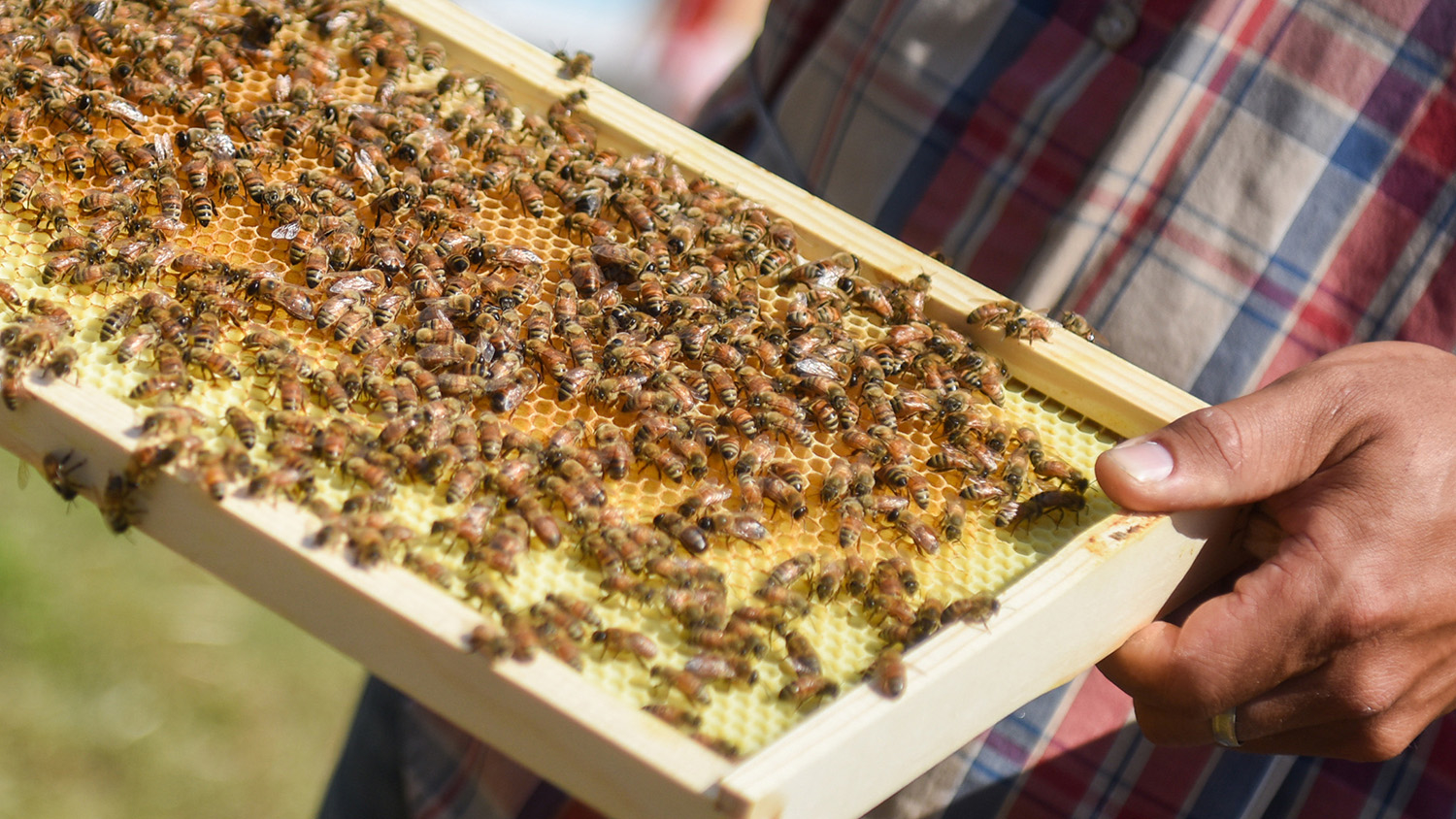 A reclaimed water system installed in February 2017 collects condensate from Cates Utility Plant and reroutes that water for use in the facility’s cooling towers, producing $6,000 in avoided water costs annually.

LED fixtures and occupancy motion sensors installed in March 2017 in a College of Textiles student lab are expected to save $4,700 annually in avoided energy costs, providing a return on investment in less than six years.

10,000 wild bees on campus were rescued in July 2016 and moved to another area of campus, demonstrating NC State’s commitment to saving pollinators.

750 milkweed plants were added in June 2017 to NC State’s Lonnie Poole Golf Course to restore monarch butterflies, a pollinator whose population is dwindling.

A student-designed aquaponics system grew tomatoes and salad greens in Talley Student Union in fall 2016. The 800-gallon system, which features a tank of up to 15 fish as well as soil-less planting containers, was moved in spring 2017 to the Oval restaurant on Centennial Campus.

3,648 pounds of produce was grown in 2016 on NC State’s Agroecology Education Farm for use in campus dining halls.

34,440 pounds of paper was shredded and recycled at the annual campus recycling drive in March 2017. Also recycled: 10,590 pounds of electronics, 440 pounds of cardboard and 1,000 pounds of rigid plastic.

183,524 gallons of fuel used by the Facilities Division, one of the university’s largest fleets.

150+ campus or campus-related events that were sustainability-focused and/or certified for sustainable practices.