Imagine you’re a college student able to walk out of your residence hall, swipe your student identification card at a small module on the nearest bike rack and start riding a borrowed bike to class. 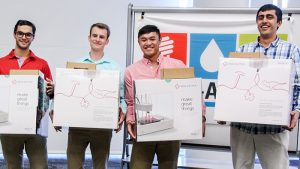 “Implementing new technologies … was definitely a difficult, challenging but fun process. We were able to get out of our comfort zone and learn something that was totally new for us,” said electrical engineering major Jack Holgado, who helped develop ReCycle. 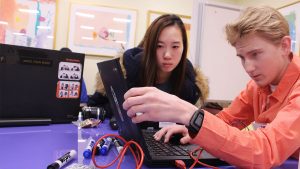 A student team works on developing a prototype during the build day of Make-a-thon.

A variation of a hack-a-thon with a sustainability twist, Make-a-thon kicked off with N.C. entrepreneur Eric Henry challenging students to see problems as opportunities for innovation. Then, a day of access to industry experts allowed students to explore the feasibility of their ideas as well as learn new technologies. On the competition’s build day, many teams used the Makerspace inside D.H. Hill Library to turn their ideas into prototypes.

“It’s such an incredibly fulfilling experience to … go from an idea on paper to it being printed and physical,” said sustainable materials and technology major Mary Paz Alvarez Valverde, whose team designed a sensor system to reduce water waste in agriculture.

On the competition’s final day – about 72 hours after Make-a-thon began – more than a dozen judges representing industry and campus partnerships listened to teams’ product pitches and selected winners. 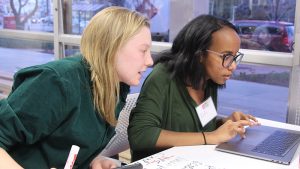 Student teams were required to have members from at least two colleges to ensure interdisciplinary perspectives.

Ideas presented at the Make-a-thon finale ranged from wearables designed to reduce food waste to self-powering lights that improve safety of alternative transportation such as biking and skateboarding. Students prototyped energy-saving, motion-sensored streetlights and plumbing that creates energy as water flows through pipes.

Many ideas stemmed from personal experiences. Industrial design master’s student Penghui Jiang twice missed the Wolfline bus to a career fair because the bus was at capacity, so his team designed an app that enables adjustment of bus routes based on real-time demand.

Other teams designed sustainability improvements to residence halls, such as self-charging motion sensors that turn off lights when bathrooms are unoccupied and waste chutes that sort trash and recycling. 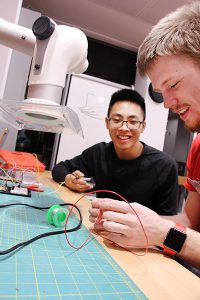 Many students learned new technology in the NCSU Libraries’ Makerspace during the Make-a-thon competition.

All ideas included an interdisciplinary perspective due to a competition requirement that teams include members from at least two of the university’s colleges.

Though Make-a-thon is over, many teams indicated their idea isn’t. Between university funding opportunities such as the Sustainability Fund and the Lulu eGames, it’s possible some projects could become actual products.  But even if these ideas remain just ideas, students said the Make-a-thon experience has provided real-world benefit.

“You may not know a lot coming in [to Make-a-thon], but with the mentorship, the technology and the resources available, you can learn a lot and apply this to future career paths you may have,” Holgado said.
See more Make-a-thon projects in this Storify story