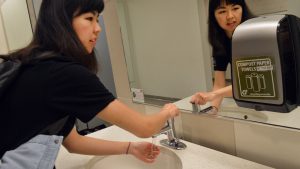 Student Xing Huang tests the composting signage that she and her research team applied to two Talley Student Union restrooms during a week-long study.

Ponder this the next time you wash your hands. If, after drying your hands, you had the opportunity to toss that used paper towel into a compost bin instead of a trash can, would you?

In a semester-long research project, a team of NC State psychology students studied that question while designing a compost collection system for restrooms in the university’s Talley Student Union.

As a project for a human factors psychology course, graduate students Jenna Darrah, Xing Huang and David Feltner researched, designed and tested a system to divert Talley’s estimated 34,000 pounds of annual paper towel waste from trash cans to compost bins. Through composting, organic material like paper and food waste is processed into nutrient-rich soil amendment perfect for gardens and landscaping.

“Talley is a hub for everyone on campus. This is a real opportunity to make a difference and capitalize on [sustainability] momentum,” said Feltner, who is pursuing a master’s degree in industrial design.

In restrooms campus-wide, NC State offers paper towels rather than electric hand dryers to reduce energy use. Composting would eliminate one of paper towels’ drawbacks: the waste created from one-time use. But only if users compost correctly.

When something not compostable is tossed in a composting bin, contamination occurs and the bin’s contents must be sent to landfill.

“One piece of contamination ruins the entire bag,” Feltner said. “Our highest design priority was to create a system that prevents user error.”

Using the human factors design process, the students systematically evaluated the task of composting and the building’s users. Did users have the desire, ability and information needed to compost? What interventions could the team design to facilitate successful composting with zero contamination?

In pre-testing, more than half of Talley users randomly surveyed indicated they would likely compost paper towels in restrooms. But the team’s challenge was creating a simple system that captured users’ attention amid a habitual activity. They studied a variety of signs, types of bins and bin locations, ultimately selecting a wall-mounted compost bin near the restroom exit as the prototype to test. 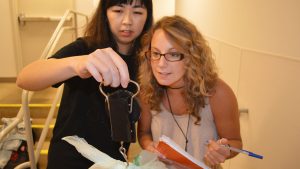 During the baseline week of testing, the team recorded daily weights of trash bags collected in two first-floor restrooms in Talley. They compared those weights with the weights produced during the second week when one compost bin was added to each restroom. Their compost solution resulted in a nearly 42 percent waste diversion rate, with about 7 in 10 users surveyed indicating they had composted.

“We had a high success rate with about 1,500 paper towels composted. In 20 bags of compost, only one one had contamination,” said Darrah, a Ph.D. student studying human factors.

The students compiled their findings as recommendations to Talley leadership about how to successfully implement a restroom paper towel composting program in the future.

A nationally-certified sustainable building through the Leadership in Energy and Environmental Design (LEED) program, Talley already features composting bins in other areas of the building and a Zero Waste Workplace initiative that has reduced waste in the building’s office areas.

The team’s project simultaneously provided building leadership with a roadmap for continuing to advance sustainability while also equipping students with real-world experience.

“This is great experience,” said the students’ professor Anne McLaughlin. “The students learned a lot about doing human factors work in a large organization.”