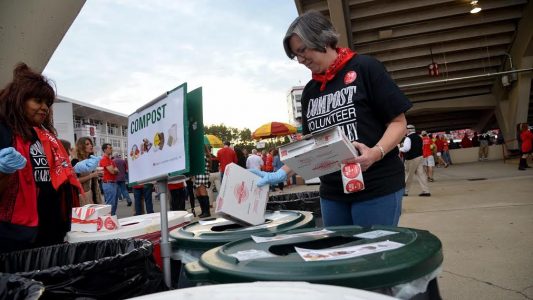 From the concourse and the stadium to the food preparation areas of Vaughn Towers, compostable material — such as leftover food, pizza boxes, paper plates and other paper-based food packaging — will be collected and composted into nutrient-rich soil amendment.

“Organic material that would have previously gone to local landfills will instead become a useful landscaping product,” said Lani St. Hill, who coordinates the Carter-Finley Composts program.

Like last year, waste stations will be located on the concourse level and staffed by student and community volunteers, who will help fans sort waste into composting, landfill or recycling bins. For the first time inside the stadium, workers who clean up after the game will separate recyclable and compostable materials from landfill items.

“We were already separating out recyclable materials. Composting has been something we’ve wanted to jump on in order to stay with the new ways of minimizing waste,” said Ray Brincefield, Assistant Athletics Director for Facilities. “This is the year that the stadium cleaning contract was up for bid, and it fit within our operating budget to be able to add composting to the contract.”

The university’s RAVE Event Services will also collect compostable material in the food preparation areas of Vaughn Towers, the 117,000-square-foot facility that overlooks the stadium.

Compost collected at the game will be combined with other campus food-related waste, including pizza boxes from residence halls and food waste from dining facilities, and transported to NC State alumna-owned Brooks Contractor, where it’s processed and sold as soil amendment in landscaping projects.

Composting isn’t the only waste minimization effort happening during home football games. The Wolfpack’s WE Recycle program has collected more than 333 tons of recyclables since it began in 2003 as a student-led initiative to increase recycling rates in tailgating lots. Student and community volunteers will continue to walk through tailgating lots distributing recycling bags and encourage recycling. 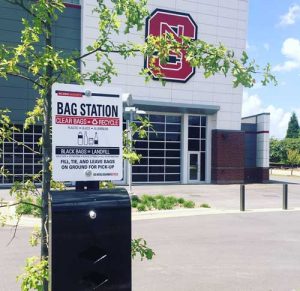 Bags to collect tailgating recyclables are now accessible in bag dispensers. Like in previous years, WE Recycle volunteers will also distribute recycling bags to tailgaters prior to the game.

This year fans also have access to 100 recycling bag dispensers that have been placed throughout tailgating lots.

“Convenience plays a crucial role in encouraging recycling among our fans. We’re excited about the new bag stations that Athletics has installed and expect to see a huge increase in our tailgating recycling collections,” St. Hill said.

Here’s the Pack’s playbook for creating less waste at Carter-Finley this fall:

WHAT YOU CAN COMPOST

WHAT YOU CAN RECYCLE

WHAT YOU SHOULD LANDFILL

Look for the gray bin without a lid on the stadium concourse or in tailgating lots.