When Taylor Spoon was an NC State student living off campus, she noticed hundreds of students throwing away lightly used furniture and household items at the end of the school year. While a program existed on campus to collect and redistribute items to local nonprofits, Spoon said trash dumpsters appeared to be a more convenient option for many students living off campus.

A few months later as Spoon interned with NC State’s Pack Promise program, which provides tuition assistance for North Carolina students who have a family income at or below 150 percent of the federal poverty level, she had an idea.

“Many Pack Promise students lack clean and reliable basic home furnishings like the goods being thrown away each year by students and others in the community,” Spoon said.

What if a program existed to connect under-resourced students with lightly used home furnishings that would otherwise go to local landfills? Spoon started running with the idea, and received a grant from the NC State Sustainability Fund to pilot the program she fittingly named Pack2Pack.

When the program launched in June, donations poured in from across the Triangle as news about Pack2Pack spread through social media and word of mouth.

For former NC State employee Jenny Rasch, who was preparing to take a new job across the country, Pack2Pack was the perfect outlet for donating pillows, curtains, furniture and other items that didn’t make it into moving boxes.

“I was thrilled to support the Wolfpack and also acutely aware of how appreciative first-generation college students in Pack Promise would be,” said Rasch, who served as a mentor for Pack Promise students for many years. “[These students] have a special place in my heart; it meant a lot to me to be able to give back.”

“Being able to help meet someone else’s needs is something I consider to be a blessing,” said sophomore Zakiya Covington, who is a Pack Promise scholar. “I know what it’s like to need help and to be able to help someone is a good feeling.”

“The financial aid package covers the cost of attendance, not the cost of life,” Wright said.

Pack2Pack removes a resource barrier, allowing students to redirect financial resources to other vital needs such as food, housing, healthcare or educational experiences. 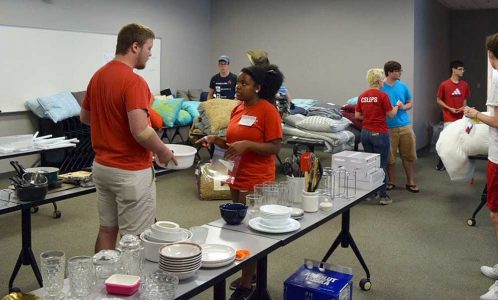 Volunteers and student shoppers at the Pack2Pack Store in SAS Hall on Aug. 14. More than 100 students connected with much-needed household items.

The program culminated on Aug. 14 with a Pack2Pack Store that connected more than 100 Pack Promise students with free, much-needed household items and furniture, which volunteers later delivered directly to students.

“The store was wildly successful,” Spoon said. “Before we opened check in at noon, there were already 15-20 students waiting to shop, and by 12:45 p.m. there was a line out the door.”

The majority of volunteers who set up the temporary store in SAS Hall and assisted the students were Pack Promise scholars themselves.

As Pack2Pack wraps up its work for this academic year by delivering furniture and other large items to students, Spoon and others are brainstorming how to build on the project’s success and expand the program.

“It means a lot to know that everyone can come together to help students here at NC State,” Covington said. “That’s what Pack2Pack is all about, helping one another and having each other’s back no matter what.”