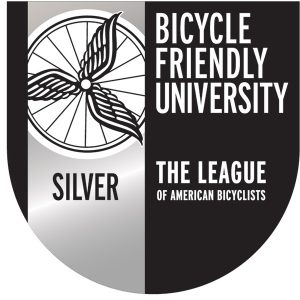 NC State has improved from the bronze to silver level in the League of American Bicyclists’ annual Bicycle Friendly University recognition program.

This year’s honorees include more 150 colleges and universities nationwide, including four N.C. schools. NC State has been recognized by the League since 2012.

The honor acknowledges the university’s promotion of biking as a transportation option, as well as its contributions to a safe environment for cyclists. NC State offers bike racks on Wolfline buses, a campus bike rental program and a student-led bike share program in the Quad residence halls. The university also has showers, clothing lockers and bike lockers available for those who commute to, from and around campus by bike. Bicycle repair classes and campus maintenance stations are also available for students.

In 2011, NC State adopted a Campus Bicycle and Pedestrian Plan that outlines future improvements and projects.