Using an outlet to charge electronics is so 2016.

From the research lab of chemical and biomolecular engineering professor Michael Dickey, Alex is part of a team creating solutions for continuous power in health monitoring and wearable electronic devices — a project partnership with the NC State-based Center for Advanced Self-Powered Systems of Integrated Sensors and Technologies (ASSIST).

“The Earth is plentiful with energy. It’s up to us to harvest it in a way that’s sustainable, continuous and conscientious,” Hsain said. 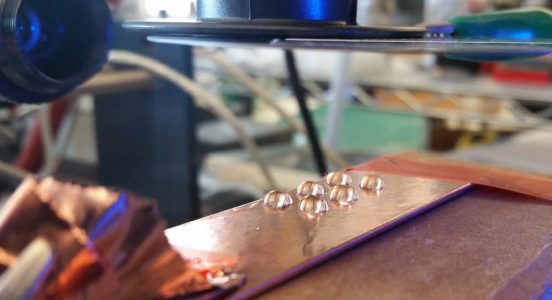 Alex Hsain and the research team explore reverse electrowetting through prototypes like this.

As an undergraduate member of the research team, Hsain is helping develop a system that harnesses energy generated by the mechanical modulation of tiny liquid droplets. Constantly compressing and releasing the droplets in between two electrodes allows for charges to build up and release at the interface, essentially converting mechanical energy into electricity through a phenomenon known as reverse electrowetting.

“Once we have a working basis of how the components of the system interact, we can then scale the product upward. How could we embed this device into a sensor, a shoe or exercise equipment at the gym? The end goal is enabling this technology to be paired with the human body,” she said.

Hsain presented this research as a student highlight speaker at the 2016 Appalachian Energy Summit, where sustainability leaders from all 17 campuses of the University of North Carolina system came to discuss solutions and form collaborations. In addition to winning the undergraduate research poster competition, she was also chosen as the inaugural recipient of the Energy Summit IMPACT Award.

“The positive response that I received at the conference was overwhelming,” Hsain said. “People really connected with the idea that small steps, like micro energy harvesting, could lead to big impacts such as energy independence.” 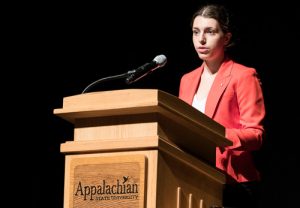 Alex Hsain speaking about her research at the 2016 Appalachian Energy Summit in Boone, N.C.

This research is just one of the multi-faceted ways Hsain is connecting sustainability with science. It started during a pre-college internship at NASA’s Langley Research Center, where she assisted a lab developing an insect-repellent coating to increase fuel efficiency of airplanes during take-off.

Then, after her first year at NC State, she completed a summer research experience at Texas A&M University, where she worked in a wind tunnel to explore the viability of alternative propulsion airships as a fuel-efficient way of transporting cargo or disaster-relief supplies to areas without airport infrastructure.

“Sustainability is not a one-size-fits-all solution; it’s multiple solutions working in parallel to make a difference. My goal is to help develop those solutions,” she said.

Hsain also recently joined the SciBridge project, a partnership between U.S. and east African scientists to advance sustainable energy research. Organized by NC State professor Veronica Augustyn and powered by a team of volunteers like Hsain, SciBridge creates and ships “materials for energy” scientific experiment kits and instructional materials to universities in Africa that are creating solutions for the continent’s rising energy needs.

“The great thing about science is that it brings people together from all types of backgrounds in an effort to forge frontiers. We’re working for the cause of global diversity and global scientific collaboration,” said Hsain, who was born in Azerbaijan and moved to Virginia with her parents in 1999.

Though her father is an engineer, Hsain didn’t consider studying engineering until her junior year at Colonial Heights High School when she was selected to participate in the Virginia Aerospace Science and Technology Scholar program and week-long summer academy.

“I slept maybe 20 hours the entire week,” she said of her excitement. “I was around people who were passionate, cared about the science and applied creativity to solving problems. That’s when I decided to [study] engineering.’” 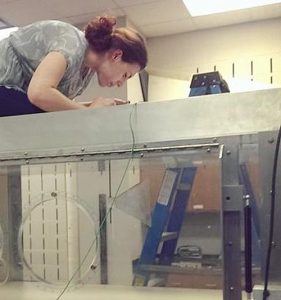 Alex Hsain working on a wind tunnel at Texas A&M University as part of a summer research experience.

On a friend’s recommendation, Hsain visited NC State and was attracted to the College of Engineering’s solution-oriented focus.

“I got a sense that this was a community of people who were very driven and had ideas about the world bigger than themselves,” she said.

At NC State, Hsain is a University Scholar and helped start the Undergraduate Research Student Advisory Council that strives to connect students from all academic disciplines with research opportunities. She also volunteers at the Wake County Animal Shelter and hopes soon to foster a rehabilitating turtle with the NC State Turtle Rescue Team.

Following graduation in 2018, Hsain plans to pursue a Ph.D. with hopes of eventually launching a business focused on practical application of scientific research – a big leap from her childhood dream of becoming a fashion designer.

“You can achieve anything as long as you have the drive and discipline to see it through,” she said. “Though I didn’t see the application of creativity in engineering until late [in high school], I’ve found that it’s never too late to discover a new passion or skill. You can overcome anything, as long as you follow your passion wherever it leads you.”

Know a student who should be featured for his or her sustainability research or involvement on campus? Let us know