In partnership with Triangle-based chemical company BASF, NC State crop and soil sciences professor emeritus Harold Coble and a corps of volunteers planted some 750 milkweed plants and wildflowers in low-traffic areas of the golf course to become a habitat for the distinctive orange and black butterflies. 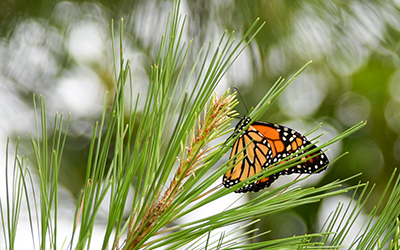 A monarch butterfly settles in to its new habitat at the Lonnie Poole Golf Course. Photos by Becky Kirkland.

Nationally, mainly because of a loss of habitat and changing weather patterns, the North American population of monarch butterflies has declined by as much as 90 percent. Not only are monarchs an iconic presence in the summer, they also are a key pollinator of fruits, nuts and vegetables and valuable members of the state’s agricultural economy.

Monarchs thrive around common and butterfly milkweed for summer forage and as a larval feeding site. Both were planted, along with a mixture of wildflowers, by a band of dozens of volunteers that included administrators, students, alumni and BASF employees, among the native grasses that make LPGC a sustainability success story.

As a Certified Silver Audubon Signature Course, LPGC is dedicated to preserving its habitat by planting native grasses and plants in areas surrounding greens and fairways. And milkweed thrives in that setting.

BASF donated both the plants and the four butterflies that were released in a ceremony on Tuesday morning behind the 16th tee box as part of its Living Acres research initiative, which seeks to show that modern agriculture and recreational spaces can coexist with monarch habitats.