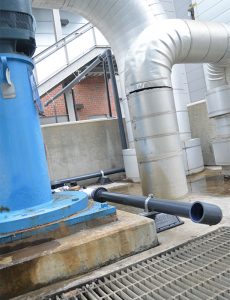 A black pipe routes the condensate from rooftop inlet coils to an underground water basin that supplies the facility’s cooling towers with water.

As outdoor air temperatures creep higher, NC State will start saving about 500,000 gallons of water annually because of a new reclaimed water system at a campus utility plant.

Located on NC State’s central campus, Cates Utility Plant was renovated in 2012 to add energy-saving cogeneration technology, which produces both electricity and steam using two natural gas-fired combustion turbines. The turbines operate most efficiently with cold inlet air. During the hot summer months, inlet coils on the facility’s roof cool outdoor air before it is routed to the turbines. That process produces condensate, which had previously been discarded.

A new reclaimed water system designed by NC State Energy Management program coordinator Rebecca Diederich and Utilities and Engineering student intern Buck Williams collects the condensate and reroutes that water for use in the facility’s cooling towers. The cooling towers use more than 20 million gallons of water annually to cool refrigerant in the facility’s chillers, which produce chilled water that provides air conditioning in many campus buildings.

“This reclaimed water system reduces the amount of potable water NC State purchases,” said Diederich, who anticipates the project reducing water costs by about $6,000 annually and achieving a full return on investment in less than 18 months.

The project wrapped up at the end of February, just in time for earlier-than-normal warm temperatures and for Williams, a biological engineering major, to finalize the project before graduating in May.

“It’s been a great opportunity to get on-the-job experience,” he said.

This is the second water-saving project at the Cates facility. The first project, which also involved a student intern, focused on capturing and using rainwater in the cooling towers.