During her first year at NC State, engineering student Morgan Murdock participated in an Alternative Service Break trip, where she served at a community center in a low-income neighborhood.

“Something I noticed is that the kids were taking snacks but not eating the food. It just broke my heart that kids would have to save their food because they didn’t have dinner or snacks at home and didn’t know when their next meal would come,” she said.

Nearly a year later, Murdock stumbled upon an opportunity that turned compassion to action.

Less than six months later, Murdock and several other students partnered with NC State Dining for the first food recovery, redistributing leftover food from campus to a local nonprofit that addresses hunger and homelessness.

“Dining believes in not wasting resources,” said Keith Smith, NC State Dining’s director of operations. “Working with the Food Recovery Network has allowed us to take food that might be discarded and instead repurpose it back to the community. We are pleased with the efforts and impact that our NC State students are making.”

NC State Dining’s leftovers are small in comparison to the up to 30,000 daily meals served at on-campus restaurants. To limit overproduction of food, campus chefs cook in small batches. Specialized software uses historic data to predict food consumption and how much food should be made that day. Dining also conducts food audits that explore opportunities to reduce waste.

While these efforts limit overproduction, it’s nearly impossible for a restaurant to close for the day without any food overage. Sometimes food can be incorporated into the next day’s recipes or served again. But once food is cooked, food safety standards dictate when leftovers must be eaten or discarded.

“Dining doesn’t set aside food for us. The amount [we recover] depends on how much is leftover,” Murdock said. “We’re not taking from dining halls; we’re helping Dining redistribute what is left over to the community. It’s more sustainable to give the food to people.” 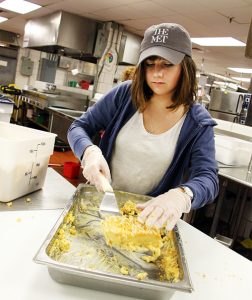 Food Recovery Network student volunteers receive food safety training and track information such as when food was prepared and any allergens. At the dining halls, volunteers transfer leftovers into reusable food containers, which were purchased with a small grant from the NC State Sustainability Fund.

“The volunteering process is awesome because you get to see how much food you’re saving that would have otherwise been thrown away.  That keeps me coming back to participate week after week,” said Austin Champine, a chemical engineering major.

The students selected Raleigh Rescue Mission and the Men’s Shelter in Raleigh to receive food donations because of the organizations’ auxiliary programs that help with housing, education and vocational training.

“Our non-profit relies on donations and could not function without them,” said Raleigh Rescue Mission chef Kirby Smith.

In its first 18 months, the NC State Food Recovery Network chapter redistributed about 1,500 pounds of food, which is equivalent to about 1,250 meals.

“Sustainability is a combination of environmental, economic and social issues. I feel that all those are being helped with this effort,” Murdock said. “We’re decreasing environmental impact of waste, socially we’re helping people get food and financially helping local nonprofits by providing resources.”