While searching for sources of bromide in the Cape Fear River watershed nearly five years ago, NC State environmental engineer Detlef Knappe and his team of researchers found more than they were looking for: high concentrations of a number of unexpected industrial chemicals in drinking water, including one — GenX — that has entered the popular vernacular in North Carolina.

Those findings, and the subsequent and ongoing investigation into why high levels of industrial chemicals were found in the drinking water of more than 200,000 people in southeastern North Carolina, have placed Knappe and his team at the forefront of a critical human and environmental health dilemma that seems to grow in intrigue and complexity with each passing week.

The June-December 2013 study that focused on bromide examined water at three locations — drinking water intakes for Pittsboro, Fayetteville and Wilmington — along the Haw and Cape Fear Rivers. The Cape Fear River watershed is the largest in the state and provides drinking water for 1.5 million people.

“We knew that bromide — a precursor for toxic disinfection byproducts — was present because disinfection processes at the studied water treatment plants produced primarily brominated byproducts, and drinking water providers were having trouble meeting safe-water standards,” Knappe said. Bromide occurs naturally at low levels, but industrial wastewater discharges can elevate bromide levels dramatically. Bromide is relatively non-toxic, but it becomes a problem when combined with chlorine, a chemical used to disinfect water.

While searching for bromide, Knappe was disheartened to find other chemicals such as 1,4-dioxane, a likely human carcinogen which is used as a processing aid in textile processing and wood pulping and formed as a byproduct of manufacturing processes used to make certain plastics and surfactants. Knappe and his team also found chemicals known as per- and polyfluoroalkyl substances (PFAS), which include perfluorooctanoic acid (PFOA), perfluorooctanesulfonic acid (PFOS), and GenX. 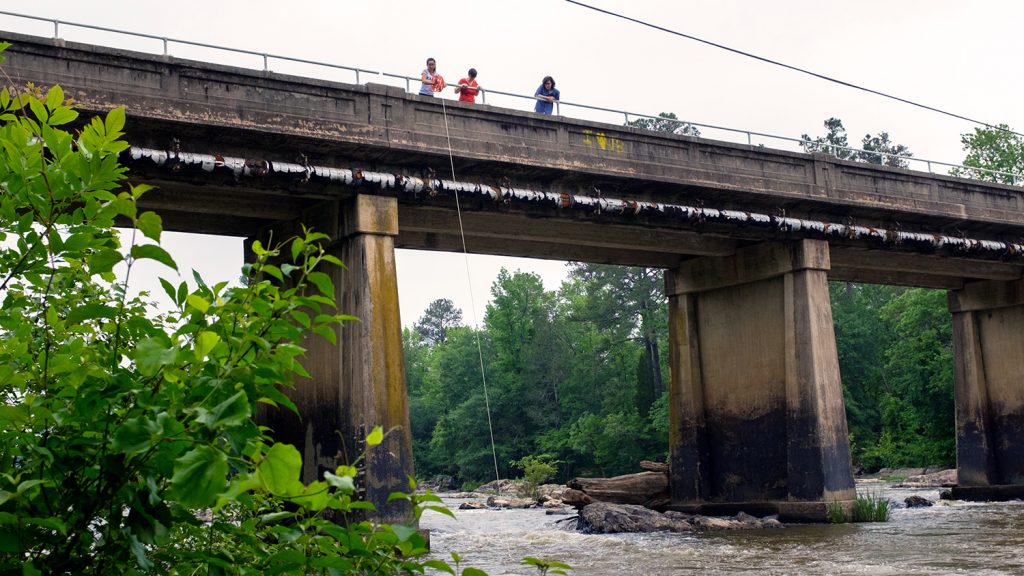 Researchers in the Knappe lab take drinking water samples from a bridge over the Haw River.

Long-chain PFAS, such as PFOA and PFOS, are persistent, bioaccumulative and toxic. They have been used in the production of polymers, water and stain repellants, fire-suppression foams, and food-wrapper coatings. Many of them have been or are being phased out and replaced by other fluorinated chemicals, such as GenX.

In Pittsboro, the study found rather high levels of the legacy PFAS. In fact, on 57 of the 127 sampling days in 2013, the combined PFOA and PFOS levels exceeded the U.S. Environmental Protection Agency’s lifetime health advisory level of 70 parts per trillion, which was enacted in May 2016.

PFOS and PFOA levels were also relatively low in Wilmington.

Finding GenX and other ‘emerging’ chemicals

What wasn’t low in Wilmington, however, were levels of GenX and other “emerging” PFAS chemicals. GenX and related compounds originated from a flurochemical manufacturing plant upstream from Wilmington owned by The Chemours Company.

GenX, the trade name for the ammonium form of perﬂuoro-2-propoxypropanoic acid (PFPrOPrA), is used to make polymers, such as the non-stick coating Teflon, food-wrapper coatings and other products. Little is known about the toxicity of GenX; the first two papers about its occurrence in the environment were published in 2015. Also, nothing was known about what happens to GenX and related compounds during water treatment.

In November 2016, Knappe’s research group and collaborators at the U.S. Environmental Protection Agency published their findings about the occurrence of GenX and related compounds in the Cape Fear River watershed. The article, which was published in Environmental Science and Technology Letters, showed that GenX concentrations in Wilmington’s source of drinking water averaged 631 parts per trillion.

Because GenX was so poorly studied, no drinking water standard existed. Knappe and his team felt that 631 parts per trillion was a high concentration relative to EPA’s 70 parts per trillion health advisory level for PFOS and PFOA. 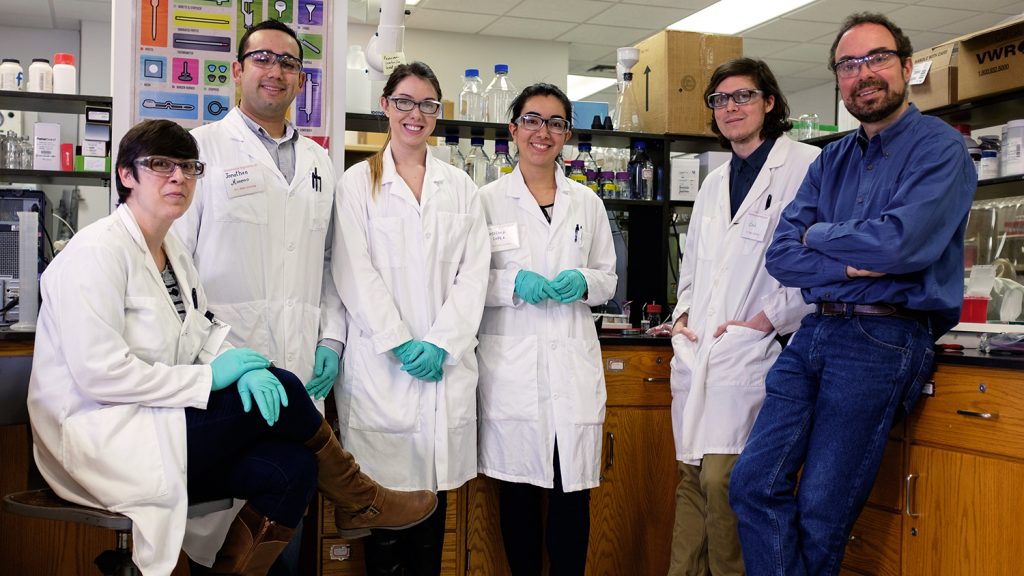 “It appears to be more difficult to remove GenX than its legacy predecessor chemicals,” Knappe said. “Moreover, substances similar to GenX – short-chain fluoroethers – occurred at much higher concentrations than both legacy chemicals and GenX, and the water treatment plant could not remove them either. Everyone seemed really focused on GenX — and for good reason — but results for the other compounds were perhaps even more concerning.

“Around 200,000 people were exposed to high concentrations of GenX and related compounds. When we consider other industrial contaminants, such as 1,4-dioxane, bromide and legacy PFAS, some 1 million of the 1.5 million North Carolinians getting water from the Cape Fear River watershed are affected by wastewater and high levels of contaminants.”

When the paper was accepted in November 2016, Knappe sent emails to numerous state and local government officials sharing the paper’s results and his own concerns about the drinking water in the lower Cape Fear River basin. After receiving no response, Knappe also sent warnings in March 2017, the same month that the paper won the Environmental Science & Technology Letters’ Best Paper award. Those warnings, too, went unanswered.

“It was frustrating at the time,” Knappe said. “Not getting heard is not a good feeling. Until the knowledge is out there, it is hard to create change. My goal was and is to drastically reduce the input of GenX and other chemicals into North Carolina water bodies and to keep them out of the drinking water.”

The state’s Department of Health and Human Services quickly set a provisional goal to keep GenX concentration levels below 140 parts per trillion, well below the 631 parts per trillion that Knappe’s study had calculated.

“DHHS used information from GenX toxicity studies that had been summarized by the Netherlands National Institute for Public Health and the Environment to justify its decision,” Knappe said. “It happened pretty quickly based on limited information, but it was a step in the right direction.”

After media started publicizing the high fluorochemical concentrations, actions by the fluorochemical manufacturer and the North Carolina Department of Environmental Quality have led to dramatically lower levels of these chemicals in the Wilmington-area drinking water, Knappe says.

Also frustrating was the lack of disclosure from the chemical plant, which is currently owned by The Chemours Company and previously by DuPont. Following public pressure, Chemours revealed, in June 2017, that GenX is a byproduct of the plant’s vinyl ether process, which had been operating for decades.

“This ‘emerging contaminant’ GenX has actually been in water since 1980,” Knappe said. “It’s mystifying why Chemours, and before that DuPont, wasn’t more careful in capturing chemicals in waste streams. For Fortune 500 companies, the cost of proper wastewater treatment and air pollution control would not be a big burden.” 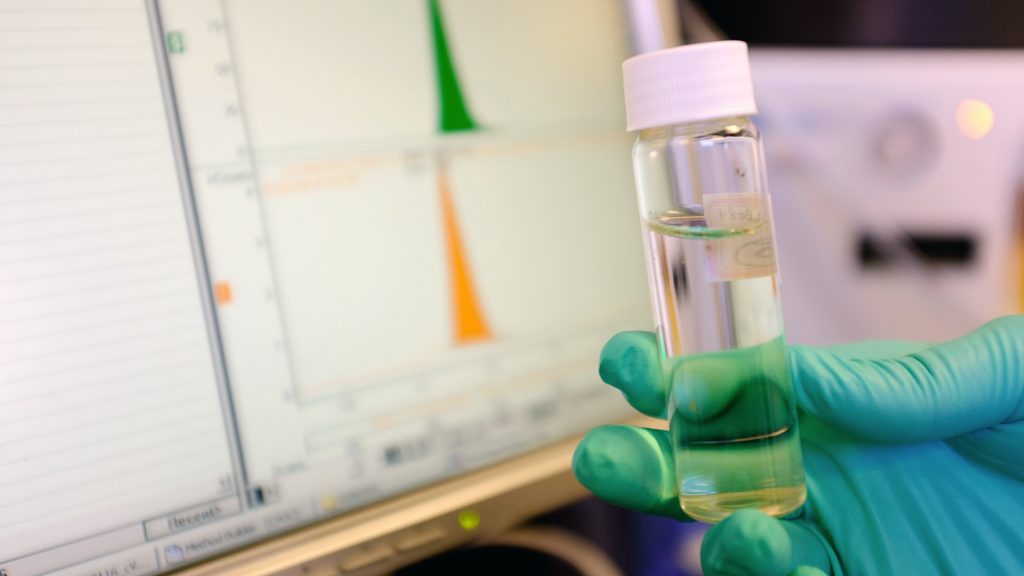 Knappe and his team are assisting in an ongoing study of GenX exposure — and its potential effects.

Knappe is involved in a current study of GenX exposure in New Hanover County residents. Led by NC State’s Jane Hoppin, an associate professor of biological sciences, the cross-sectional, community-based study of lower Cape Fear River area residents who are served by public utility water recruited 400 volunteers to give blood, urine and drinking water samples and to complete a questionnaire on their water-use history. The samples will be analyzed for GenX and related chemicals. Blood and urine samples will also be used for clinical tests (lipid profile, thyroid function, liver function and urinalysis).

All results from the New Hanover County study will be shared with both the community as a whole and each individual participant. Preliminary results are due this spring.

Knappe’s lab is also developing and evaluating filtration materials that can remove harmful chemicals from drinking water, both at the treatment plant and your home. He says commercially available reverse-osmosis units that are fitted underneath the sink are effective for the removal of fluorochemicals and 1,4-dioxane. But he does not recommend whole-house filters for residents in the Wilmington area.

“In the end, managing PFAS and other industrial contaminants requires controlling upstream sources,” Knappe said. “We must do a better job of keeping chemicals out of drinking-water sources.”