Imagine a future where the power of your footsteps can generate electricity.

Students Alberto Carrillo, Priyanka Kallem, Mariam Shah and Gabrielle Tonsay designed a layer of piezoelectric-discs that can be installed underneath floors to convert the energy of footfalls into electricity.

“People are constantly walking around, biking and exercising, and we wanted to find a way to harness this energy,” Shah said. “We know the idea is possible; now we have to figure out how to create it.” 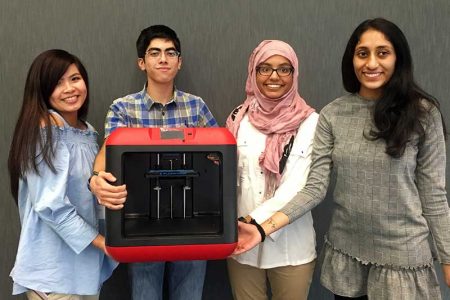 One of the goals of Make-a-thon is to kickstart ideas that could improve the sustainability of  campus, the community or world.  The Jan. 26-28 event brought together 148 students on 39 interdisciplinary teams representing 10 of the university’s colleges.

Make-a-thon kicked off Friday night with NC State alumna Maria Kingery sharing her experience as an entrepreneur in sustainable energy. Then, College of Design faculty members Tania Allen and Sara Queen introduced students to design thinking as a tool for developing their ideas.

On Saturday, many teams gathered in the Makerspace at D.H. Hill Library to turn their ideas into prototypes. Teams used technologies ranging from 3D printing and microcontrollers to virtual reality and Internet of Things (IoT).

“We were surprised how much better the idea became over the course of the day,” said Matt Bryan, whose team created a campus reusable cup program.

On the competition’s final day – less than 72 hours after Make-a-thon began – teams pitched their ideas to nearly 40 judges from campus, local businesses and the community. 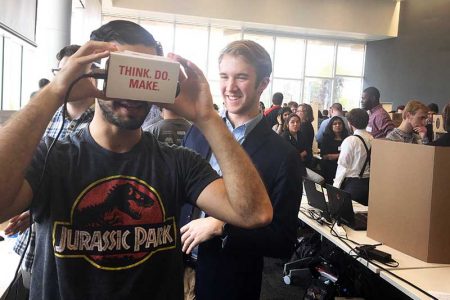 All ideas included an interdisciplinary perspective due to a competition requirement that teams include members from at least two of the university’s colleges.

Though Make-a-thon is over, many teams indicated their idea isn’t. Between university funding opportunities such as the Sustainability Fund and the Lulu eGames, it’s possible some projects could become actual products.