That’s because every year he inspects hundreds of them as the university’s lab safety manager.

Are chemicals stored properly? Are safety protocols followed? Is safety equipment performing as designed? And, lastly, a not-so-common question asked by lab safety managers: is there an opportunity to save energy?

I enjoy finding opportunities to save energy

Lab buildings are energy intensive, using more energy per square foot than any other type of campus building. This is mostly due to fume hoods, an important lab safety feature that protects researchers from exposure to harmful fumes.

Fume hoods offer a counter-height workstation with direct access to fresh air ventilation so that any any hazardous fumes produced during experiments are immediately exhausted outside the building.

According to the Berkeley Lab, a single fume hood consumes as much energy as 3.5 houses. Multiply that by the approximately 1,150 fume hoods on campus, and the impact of Fahim’s work becomes clear.

“I enjoy finding opportunities to save energy,” said Fahim, who estimates these these repairs generate about $50,000 in energy savings annually. 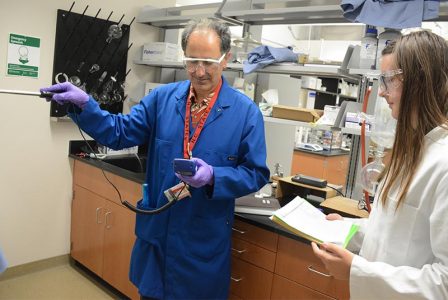 Fahim and student intern Keara Klinge measure air velocity in a fume hood. “It’s interesting to be able to go around campus in all the labs,” said Klinge, who is majoring in Environmental Technology and Management. “I’m learning a lot about ventilation.”

Restoring fume hoods to optimal operation is just the start. If Fahim notices a fume hood is not being used, he might suggest temporarily decommissioning the fume hood to save energy.

If a fume hood is larger than what lab users need, he might explore retrofits that reduce over-ventilation. This year in Riddick Hall he facilitated a fume hood modification that will reduce energy costs an estimated $3,000 annually.

While these projects increase efficiency, Fahim said the biggest opportunity for saving energy in labs is in the hands of lab users.

Empowering Labs To Save

Fume hoods have a moveable glass barrier called a sash that shields researchers from experiments inside the fume hood. A closed sash not only keeps lab users safe but can also save energy by slowing the amount of indoor air exhausted outside.

The energy savings really add up, particularly with variable air volume (VAV) models that make up about 40 percent of NC State’s fume hood inventory. By closing the sash when a VAV fume hood is not in use, lab users can avoid up to $2,000 in annual energy costs per hood.

“You should only open the sash to set up or modify an experiment,” Fahim said. “For safety and savings, shutting the sash is the most important thing lab users can do.”