When NC State student Kelsey Shevlin moved into Wolf Village Apartments, something bothered her about cooking. It wasn’t the time or effort required to prepare meals; it was all the food scraps she tossed into the trash can.

“It really started nagging me,” she said.

As apple cores, banana peels, egg shells and other food waste started adding up, Shevlin decided to do something about it.

Now, residents in this University Housing apartment complex have access to kitchen composting courtesy of a compost collection program Shevlin started. So far, about 60 apartments in Wolf Village are using compost jars, which residents fill with food scraps and empty as needed in a nearby outdoor composting dumpster. That material is transported to a nearby composting facility for processing into compost, a nutrient-rich soil amendment.

The program began last semester when a grant from the NC State Sustainability Fund financed the purchase of compost jars, as well as materials for educational workshops about composting.

After just one semester of composting, Shevlin surveyed participants and learned than more than 70 percent of students want to continue composting after graduation. 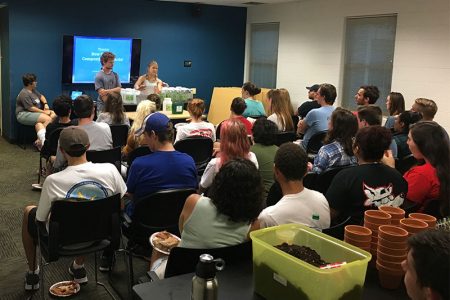 A statistics major with minors in accounting and Italian, Shevlin is both a University Scholar and Caldwell Fellow.  During her sophomore year, she went on a Caldwell spring break trip to San Francisco, where she saw composting bins integrated throughout the city.

“That’s when I realized how much trash could be diverted,” she said. “Then, after seeing some of my friends [composting] and being really passionate about it, I wanted to try.”

The next semester one of her courses required a final project related to sustainability. Shevlin chose to write a Sustainability Fund grant proposal to fund the launch a Wolf Village composting program.

She received the grant and worked with NC State’s Waste Reduction and Recycling Office to kickstart the program. Now that the program is underway, Shevlin continues gathering feedback about the compost bins and the process in order to improve the program. 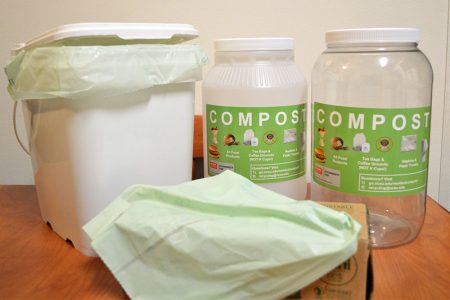 Types of compost bins that are being tested as part of the Wolf Village composting program.

“Food waste and other compostables are the number one items that still fill our waste-to-landfill dumpsters on campus,” said Lani St. Hill, outreach coordinator for NC State Waste Reduction and Recycling. “This represents a huge loss of both economic and environmental resources.”

“Composting is really good for our environment and our future,” Shevlin said. “If one resident [in the composting program] shows a friend or family member how to compost, and they show another friend, we can really start to make a difference.”