Near the banks of Lake Raleigh is an NC State garden that grows food while also developing student leaders.

“The garden is a living workspace to bring innovative ideas to fruition,” says graduate student Andrew Harrell. “I joined SOUL Garden as a way to [grow] plants but in a community that allows me to implement projects and teach visitors about where food comes from.” 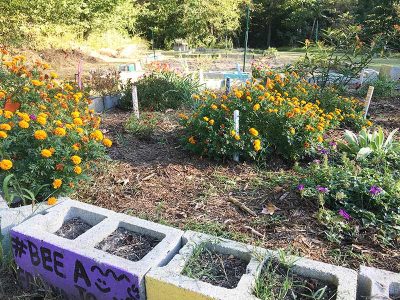 A portion of the SOUL Garden is devoted to pollinator-friendly plants.

Last year SOUL Garden grew enough produce to feed more than 40 people, but that’s just the start of the garden’s harvest. Increasingly, the garden is home to student innovations, such as a greenhouse that Harrell and other students are building from a salvaged soccer goal post.

Every week Scrap to Life volunteers pick up compostable material collected by businesses located on Centennial Campus. The material goes to SOUL Garden, where students manage the process of transforming it into nutrient-rich compost for the garden.

“A goal of mine is to divert the amount of material sent to landfills, and composting not only does this, but it replenishes the soil with nutrients needed for plants to thrive,” says student Rachel Witner, who leads Scrap to Life.

Witner has been involved in SOUL Garden since her first year at NC State when she joined to reconnect with nature through gardening.

“I was tired of being inside all the time,” she recalls. “I wanted to grow food and I soon realized that [SOUL Garden] is about far more than just gardening. The things I learned through SOUL, I could not have learned in the classroom.”

The garden’s adviser, Shamsa Visone, wants the garden to cultivate students into the leaders of tomorrow. An NC State employee and alumna, Visone mentors 16 student interns who work in various teams to advance the garden’s mission. 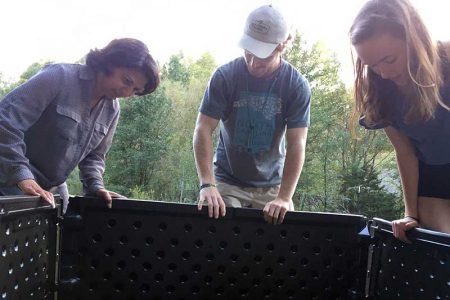 “Every day, we look for new ways of bringing confidence to our students so they can graduate feeling empowered to take on the world,” Visone says.

Recently, one of the hard lessons students have learned is how to rebound after setbacks. During Hurricane Matthew in October 2016, the garden flooded, destroying most of the crops and other infrastructure. Since then, the students have rebuilt the garden in more resilient ways, including the installation of raised beds and fencing to protect crops.

This spring, the garden will receive an efficiency boost when members of the NC State chapter of Engineers Without Borders install a drip irrigation system that will irrigate the garden using water from Lake Raleigh.

“I’m excited by how much the garden has progressed,” says student Alex Burnette. “When I joined, we had maybe six or eight people doing everything for the garden and now we have a large group, including student members, leaders and volunteers.”

Today’s momentum is just one reason to celebrate. In 2017, the garden received an NC State Deborah S. Moore Service Award for Outstanding Student Organization. In 2018, the garden reaches its milestone eighth year as an outdoor classroom where dozens of students have learned about food, gardening, leadership and how to Think and Do.

“You can learn so much from the garden,” Visone said. “If you want to be innovative, this is a great space.”