New NC State research has found that an invasive species of tunicate known as Clavelina oblonga crowds out and overgrows other marine fouling species and reduces biodiversity.

Marine fouling species are invertebrate, filter-feeding organisms that settle on hard substrates underwater – like docks or ship hulls – and serve as a food source for small fish and crabs. Barnacles and mussels are well-known marine fouling species. Tunicates like C. oblonga, unlike barnacles and mussels, are soft-bodied. Once attached to a hard surface, C. oblonga filters water through dozens of vase-shaped appendages, feeding on tiny plankton. 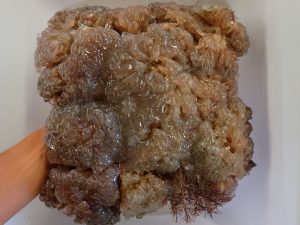 Graduate students Katelyn Theuerkauf and Seth Theuerkauf, with professor of marine, earth and atmospheric sciences Dave Eggleston, found that the invader had set up shop off the North Carolina coast near Beaufort after conducting a study on the changes in the marine fouling community.

“We set out to repeat a study from the 1970s of the marine fouling community in Beaufort to see if the community composition has changed over the last 40 to 50 years,” says Katelyn Theuerkauf, lead author of a paper describing the research. “Not only was the community much less diverse, but C. oblonga appeared to be a driver of the change.”

The researchers surveyed community composition by measuring species recruitment – an indicator of the different larval species that are present in the water column that could potentially settle and grow within a community – each month. They also looked at community development, which refers to the species that actually settle and thrive.

While the number of species in the water column in both the 1970s study and the current one were similar, the composition of long-term communities was not. The researchers attributed this difference to C. oblonga.

“The difference is in the way that C. oblonga recruits and develops over time,” says Katelyn Theuerkauf. “Though C. oblonga only recruits one month of the year, the species doesn’t die back during the warmer or cooler months of the year, which prevents other species from colonizing the area. In the previous study, species settled and died off each year, which allowed other species the opportunity to settle on the substrate and resulted in increased species diversity over time.”

C. oblonga’s success in a relatively short amount of time – it was first recorded in the Beaufort area three years ago – could have implications beyond decreased diversity.

“So far, we haven’t noticed any predators that feed on C. oblonga to help curb its growth,” adds Katelyn Theuerkauf. “It is unclear if this species could impact aquaculture efforts like oyster farming – if C. oblonga settles on materials used for growing oysters, for example, it could impact yields. Our study highlights how one invasive species can substantially alter community biodiversity within a short time.”

The researchers’ work appears in Ecological Monographs and was supported in part by the National Science Foundation.