Proving that growth and savings are simultaneously possible, NC State has reduced campus energy use by 33 percent and water use by 50 percent per gross square foot since the early 2000s despite a more than 50 percent increase in campus square footage. 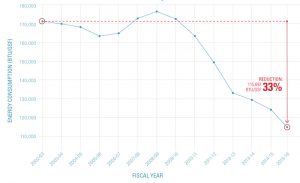 “The significance of NC State’s ability to meet both its energy and water reduction goals cannot be overstated,” said Erik Hall, program manager for Energy Management. “The achievement of these goals represents unprecedented planning, coordination and effort toward campus efficiency and sustainability.”

Energy Management coordinates the university’s utility efficiency efforts, but Hall said reaching the goals has been a collaborative, campus-wide effort — from outreach programs that promote energy awareness on campus to designing, renovating and constructing campus buildings with energy efficiency in mind.

Additionally, Energy Management conducts dozens of energy conservation measures annually that improve efficiency, such as replacements and tune-ups on major boilers and other equipment, retrofitting old lighting with LED technology, and seasonal efforts that allow for energy-saving temperature adjustments during unoccupied times in summer and winter. Many of these efforts are funded through realized campus energy savings, which state legislation allows UNC system schools to reinvest into additional energy conservation measures.

Cogeneration at the Cates Utility Plant improves efficiency and enables NC State to generate some of its own electricity.

Among the largest single contributors to campus energy reduction is the addition of energy-saving cogeneration technology at NC State’s Cates Utility Plant in 2012. The renovation, which creates millions in avoided energy costs annually, is funded by an energy performance contract that allows the university to finance the project through future energy savings.

The Raleigh-area drought in 2007 fast-tracked many campus conservation measures such as water-efficient plumbing fixtures, strategic irrigation practices and removal of campus dining hall food trays that is estimated to avoid 55,000 gallons of dishwashing water weekly. 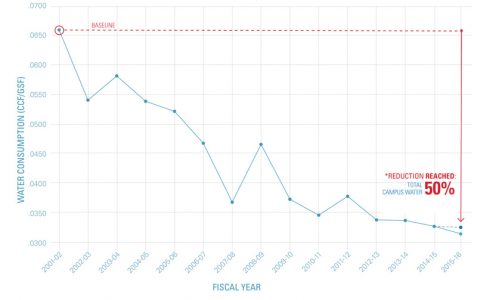 In 2016, a reuse water pipeline was completed on Centennial Campus, bringing City of Raleigh reuse water to irrigation systems, toilet flushing at James B. Hunt Jr. Library and cooling towers at the Centennial Campus Central Utility Plant. Reuse water is treated but not drinkable, resulting in reduced environmental impacts from treatment as well as a lower purchase price.

“We constantly seek ways to operate more efficiently without sacrificing reliable and quality utility service to our research-intensive campus,” said Jack Colby, the assistant vice chancellor for the Energy Systems department of which Energy Management is part. “Reducing our energy and water use demonstrates the university’s commitment to sustainability and stewardship of resources.”

As part of the development process for the university’s 2017-2022 Sustainability Strategic Plan, NC State is amid setting its next energy and water reduction goals.

“This is only the beginning of our drive toward further reductions,” Hall said. “We will continue to set seemingly impossible goals and then achieve them.”