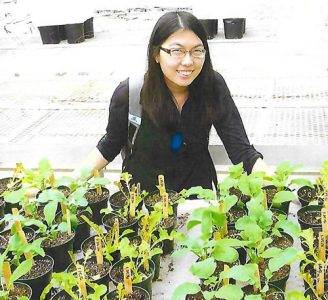 As part of a capstone project for NC State’s EcoVillage, a University Housing living and learning village focusing on sustainability, Yim designed a comparative experiment to test her hypothesis. With a small grant from the Office of Undergraduate Research, she purchased equipment and supplies to brew compost tea. Yim tested 40 radish plants and 40 salad lettuce plants, applying compost tea, chemical fertilizer or organic fertilizer according to manufacturer recommendations and comparing the three products to a control group.

“Interestingly, only with compost tea did all of the lettuce seeds germinate within the first week,” she said. “Although I don’t have all of the [soil sample tests back] yet, I can say visually the crops in the compost tea and organic fertilizer appeared the healthiest. The organic roots had substantial root growth. The root systems were literally coming out of the pot,” she said.

Even without the experiment’s final results in hand, the experience has shifted Yim’s career focus toward research.

“I’ve always been interested in research, but honestly I didn’t think I’d ever go into [agriculture]. I was more focused on animals and ecosystems. But then I volunteered at NC State’s Agroecology Farm with Ecovillage and took Dr. [Bob] Patterson’s World Population and Food Prospects course. That’s when I got interested in [agriculture].

All these experiences and impact happened because of an accident, Yim said. While signing up for first-year campus housing, Yim accidentally clicked on the section related to living and learning villages. That’s how she discovered EcoVillage, which would become her on-campus home for the next two years. From camping trips to planning speakers for the village’s weekly “Sustainability Thursday” series, Yim immersed herself in the variety of programming offered.

“I’m grateful for what Ecovillage has done. When I came in, I didn’t know what I wanted to do [for a career]. The village helped me experience different aspects of sustainability through its events,” she said.

Yim recently added a second major — crop science with an emphasis on agroecology — and ultimately hopes to become a professor, following in the footsteps of the professors who piqued her interest in agriculture.

“There’s something about [my crop science] professors that they really love what they’re doing. I guess I just caught onto that,” she said. “I like the idea of passing on the knowledge of how to care for the Earth and agriculture — making sure it’s sustainable and has minimal impact.”