On the first day of his first year as a student at NC State, Brian Iezzi’s bike was stolen. Disappointed and determined to find another affordable way to cycle around campus, he and his friend Carlos Vega brainstormed possibilities and had one of those scarcity-drives-innovation moments of inspiration. What if campus had a free, small-scale bike share program based at residence halls so that students could walk outside, hop on a bike and cycle to class? 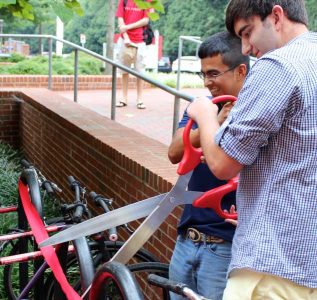 A year later in collaboration with WolfWheels, a campus bike rental program that donated six bikes and ongoing bike maintenance to the cause, QuadBikes loaned its first bike to residents of the Honors Village residence halls.

“You could come out your dorm and five minutes later be on your way,” Iezzi said. “The experience [of building QuadBikes] opened me up to a lot of opportunities and people on campus.”

Sustainability and entrepreneurship have become recurring themes for Iezzi, a senior double majoring in textile engineering and material science engineering. After launching the university’s first residential bike share, he helped kickstart a cleantech company and a student sustainability ambassador program — all during his first year at NC State.

While helping in the lab of professor Dr. Linyou Cao, research uncovered a cost-effective replacement for platinum as a catalyst in production of hydrogen. With huge implications for clean energy, Iezzi helped found Platinix, a startup that became a finalist in the $20,000 Cherokee-McDonough Challenge and a semifinalist in the $100,000 ACC Clean Energy Challenge and $20,000 MIT-CHIEF competitions.

“First semester of freshman year, I went into [Dr. Cao’s] office and said, ‘I’d like to work [in the lab].’ Eight months later we started a company,” Iezzi said. 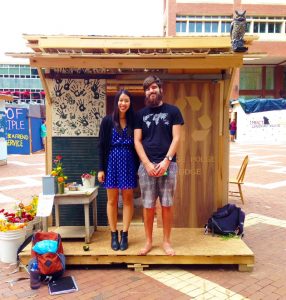 Iezzi, right, with fellow NC State Steward Amelia Fujikawa were among the team that built the Hodge Podge Lodge for the 2015 campus Shack-a-thon.

“The first project I led with the Stewards — a series of educational videos — completely failed. I couldn’t get my team to meet and I realized it was because the content in the videos could be found in a dozen places online. It made me realize that to really facilitate change, you have to take the script and rewrite it,” Iezzi said.

Over the past three years, Iezzi and the Stewards have built a high-impact program that educates the campus community about sustainability. He’s helped create videos, twice constructed a “sustainable shack” for the university’s annual Shack-a-thon fundraiser, and coordinated an energy and water conservation competition among three residence halls.

“It’s amazing how much [the NC State Stewards] has grown. When we started we had no clue that we’d make such a big impact,” he said. “Without the Stewards, I don’t think I would have had the confidence to work on a lot of things I worked on [while at NC State].”

In addition to several industry internships, Iezzi has been a University Housing resident adviser, worked with the university’s Office of Venture Development and chaired the 2015-2016 board of the student Sustainability Fund, which distributes grants for campus sustainability projects. 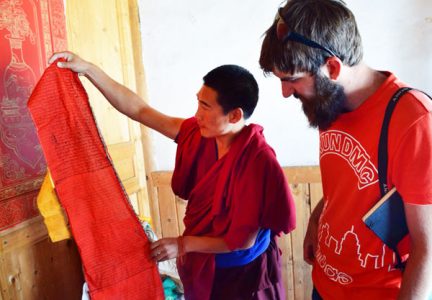 Iezzi, right, visited a prayer flag printing house at the Labrang Monastery in Xiahe, China as part of a 79-day tour of the Silk Road. Photo courtesy of Brian Iezzi

With a grant of his own — funded through the North Carolina Textile Foundation — he and fellow textile engineering student Hunter Hendrick spent summer 2015 on an 79-day, 8,000-mile overland journey of the historic Silk Road. They crisscrossed six countries in the Caucasus, Central Asia and China, learning about the history, culture, sustainability and impact of textiles on the region.

Back on campus for his senior year, Iezzi’s sustainability impact has continued as an undergraduate research assistant in the NEXT group (Nano-EXtended Textiles), a driving force in the construction of a sustainability-themed “shack” that raised $3,700 for Habitat for Humanity in NC State’s Shack-a-thon fundraiser, and a member of the winning team in the university’s first Make-a-thon sustainability product design competition.

“Across campus Brian inspires others to actually get out and do something —  to use their talents and abilities for a greater good,” said Rebekah Dunstan, a sustainability program coordinator who advises the NC State Stewards.

A recipient of North Carolina Campus Compact’s leadership award and special merit in the Brower Youth Award competition, Iezzi will graduate in December 2016 and anticipates working on another startup, continuing on to graduate school or finding work in industry.