NC State students Emily Neville and Carly Kvietok believe that the old clothing at the back of your closet has a story, and they want to ensure that story is far from over.

That’s why they created Reborn Clothing Co. to transform clothing you no longer wear into new products.

“I realized it would be unique to create products from garments that have nostalgic value [such as], ‘This is my favorite concert t-shirt, this was a baby outfit, this is what I wore on that first date,” said Neville, the president and co-founder of Reborn.

A team of Reborn designers – all NC State students – can transform these sentimental garments into items such as a pencil pouch, laptop case or other custom design.

“I believe in the emotional value of clothing and memories attached to it. You want to make use of it and still remember it but have it in your life in a useful way,” said Kvietok, Reborn’s design director and co-founder.

As Reborn revives abandoned garments, the co-founders hope to reduce textile waste, which is a 25.5-billion-pound problem annually in the United States, according to estimates by the U.S. Environmental Protection Agency. The average U.S. citizen throws away about 70 pounds of clothing and other textiles each year.

While a reduction in the amount of clothes purchased and an increase in the current 15 percent textile recycling rate are vital, Reborn’s co-founders believe they’ve found a niche that helps customers reuse their favorite items.

“We feel like through this we’re taking small steps to making people rethink their textile waste,” Neville said. “I really care about making a change.”

It Takes A Team 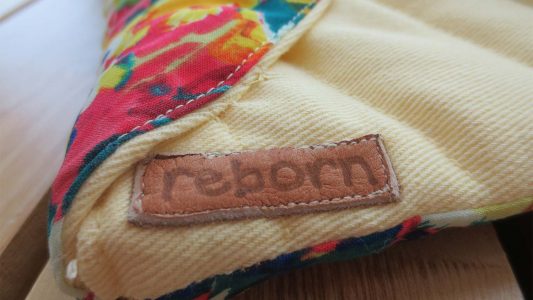 Though political science is her major and career path, Neville has long had interest in textiles, stemming from middle school when she took weekly sewing classes at a Fayetteville, N.C., quilting shop. Today, she coordinates the business aspects of Reborn while Kvietok, who is majoring in Fashion and Textile Design, leads the design realm.

Several College of Textiles professors, as well as the NC State Entrepreneurship Initiative, have helped guide the way toward Reborn’s launch later this year. After a crowdfunding campaign concludes November 3, the NC State community will be able to place orders online and drop off garments at the Reborn booth during the weekly Campus Farmer’s Market on the Brickyard. Orders will be completed within two weeks by a team of NC State designers working for Reborn.

Eventually, Kvietok and Neville hope to fulfill orders for Raleigh-area clients and beyond.

“[Launching Reborn] has been a huge learning process, but the attitude of NC State prepares us for this. ‘Think and Do’ ecompoasses everything we’re doing,” Neville said.

Nurturing An Idea And The Next Generation

And they’re passing that spirit on to the next generation, too. Beyond the business, the co-founders are teaching after-school sewing classes for Raleigh youth. Amid threading and stitching, they’ll weave in lessons about sustainability and entrepreneurship.

“[Reborn] has been a great experience. It was a leap of faith, and we’re going to figure it out along the way,” Kvietok said. “But it’s about the idea. If you have a good idea, you can make it.”