This guest post is written by Jacob Jay, an NC State student and member of the NC State Stewards sustainability leadership program. This is part of a series of student perspectives on sustainability challenges. 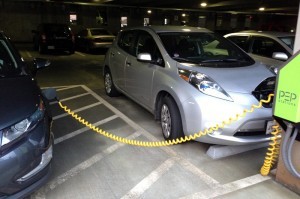 An electric vehicle fueling at an NC State charging station.

A decade or so from now, will the car you buy be all electric?

Maybe, maybe not. But if clean energy is to replace oil as a source of energy, electric vehicles must be widely adopted first.

Moving away from oil-based fuel sources and toward renewable sources of energy like wind and solar will be no small feat. There is no way for America to rapidly replace oil consumption with renewable energy and prevent the associated fossil fuel emissions — at least for now. Currently, the majority of oil used in the United States is associated with transportation, and clean energy has no way to replace this oil without widespread adoption of electric vehicles.

To understand how important electric vehicles are to reducing U.S. emissions, let’s start with a breakdown of U.S. energy generation and consumption. The U.S. Energy Information Administration breaks down all energy generation into five categories: petroleum, natural gas, coal, renewables and nuclear.  In 2012, petroleum generated 36 percent of U.S. energy (more than any other category), and 72 percent of that energy powered transportation. Transportation is the second largest consumer of energy in the United States at 28 percent. That’s behind electric power, which accounts for 40 percent. But while electric power is generated from almost one third clean energy sources (including nuclear), just 4 percent of transportation energy is generated from clean energy sources.  According to the Center for Climate and Energy Solutions, transportation accounted for 34 percent of U.S. CO2 emissions in 2013, just behind electric power at 40 percent.  The majority of these emissions come from light-duty vehicles.

If transportation is such a big source of energy demand and emissions, why hasn’t it been possible to incorporate clean energy to the degree that it has been done with electric power? As of yet, there is no market-ready, cost effective vehicle that operates on clean energy generated within the vehicle. Most cars use gasoline as fuel because gas enables power generation within the vehicle. There are currently no ways to effectively generate enough clean energy inside a car to power a car. The only way to use clean energy in a car is by storing power in a battery. However, if you are using power from the electrical grid for your electric car, you are most likely still using fossil fuel-based energy sources.

This creates a problem for electric vehicles because one of their biggest selling points —their contribution to environmental sustainability — isn’t going to be fully realized until the United States shifts toward more clean energy as a whole. At the same time, that renewable energy won’t be able to prevent emissions from transportation unless there is a healthy market of electric vehicles. As of right now, electric vehicles aren’t a significant part of the market but some believe that electric vehicles will grow in popularity.

According to the Wall Street Journal, only one in every 150 cars sold in the U.S. in 2015 was capable of using grid power. But companies are working hard to bring the electric car to the masses.  Several automakers are preparing to sell cars with an all-electric range of more than 200 miles and at a price that is comparable to the price of the average new car sold in the United States.  At the same time, it is hard to predict consumer response to these new options because these products offer relatively unprecedented pros and cons.

Ultimately, transportation and petroleum are responsible for a significant proportion of the United States’ greenhouse gas emissions. But if all we do is switch to driving electric cars, that won’t be enough to significantly cut emissions, according to a research study by NC State assistant professor Joseph DeCarolis. We have to also continue adding more clean energy sources to U.S. power production. If Americans drive less and American cars boost fuel efficiency, that could theoretically also help lower emissions by decreasing fuel consumption. Newer and more advanced hybrid vehicles and trends toward urban living make these options seem like viable sources of greenhouse gas reduction in the near future. Electric vehicles may not be the only way to reduce transportation emissions, but they are likely to be part of any significant reduction.