You may one day breathe fresher air on the highway and in your home courtesy of three teams of NC State student entrepreneurs. 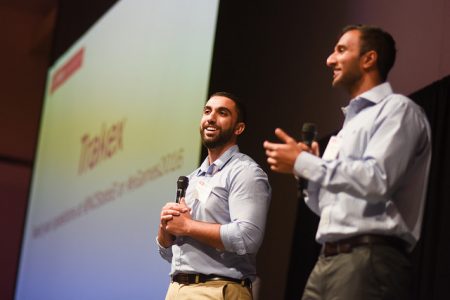 Trakex teammates Tayyab Hussain, Mary Summers, Francesco Palermo and Moaad Benkaraache took top prize in the eGames’ New Venture Challenge and placed second in the Design and Prototype category for their proposal to maximize cargo capacity in the shipping industry through use of 3D sensor technology.

“Almost 25 percent of trucks on the highway are empty and 36 percent of trucks that aren’t empty are underutilized. If Trakex can help decrease that wasted trailer space by just half, we can decrease emissions by 100 million tons per year. This increased efficiency also translates into millions of dollars in savings,” said Benkaraache, a senior studying industrial engineering.

Through discussions with his father, who works as a truck driver, Benkaraache learned of the shipping industry’s challenges: driver shortages, strict regulations, shrinking profit margins and inaccurate package dimensions provided by customers. Using cost-effective dimensioning technology, Trakex measures cargo as it is loaded into trucks, optimizing available space and profitability in real-time.

“Trakex will help the shipping industry operate more efficiently both in terms of speed of cargo processing and in trailer packing,” Benkaraache said. 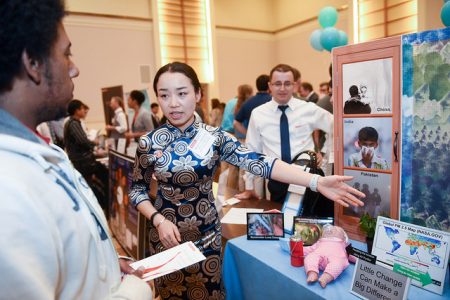 Another big winner in the eGames is the Nonwoven Air Filtration Curtain, which topped the B Corps Champions Challenge category.

A new eGames category for 2016, the B Corp Champions Challenge allows NC State students the opportunity to create and showcase a business plan for a new sustainable venture that uses business as a force for social and environmental change.

The Nonwoven Air Filtration Curtain uses an engineered fabric that makes a curtain function as an air filter. Lightweight, customizable and affordable, the curtain reduces a building’s intake of particulate matter, a type of air pollution associated with negative health impacts.

The idea came during a textiles class, during which teammates Sumit Phalak, Xiaomeng Fang, Yasar Kiyak and Samaneh Mohseni recognized the extreme air pollution in their home countries.

“Our group has very diverse nationalities including China, India, Turkey and Iran, where people suffer from the air pollution,” Fang said. “We decided to develop an air filter curtain that is a most needed product for customers living in the places with severe air pollution.”

The product requires no electricity and will be marketed globally for about $15 — a much lower price point than air purifying machines that are financially out-of-reach for low-income families.

Affordable technology would indicate when to change home air filters 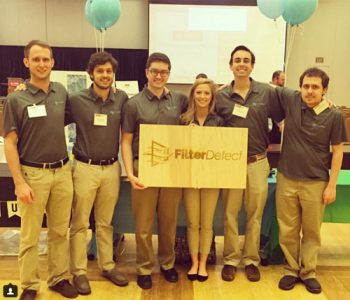 A second team of students focused on improving indoor air quality placed third in the Design and Prototype category. FilterDetect monitors the particle saturation on air filters, alerting the building occupant via smartphone that the filter need to be changed.

“A dirty home air filter can result in health and economic problems. FilterDetect is a device that will be able to alert the user of the proper time to change their air filter based on how dirty the filter has become, not based on a manufacturing recommended time to replace the filter,” said Taylor Carey, a senior studying mechanical engineering.

The idea for FilterDetect emerged last spring when air conditioning systems failed in some of the team members’ homes and workplaces — all in some part due to old, clogged air filters.

“Unlike other devices on the market, our device will be economical for the average homeowner and work independently of the filter brand, filter size, and power of the HVAC system, providing a much more accurate estimate of when a home air filter should be changed,” Carey said.

Offered by the NC State Entrepreneurship Initiative, the Lulu eGames is the university’s premier student entrepreneurship competition, offering more than $60,000 in prizes.