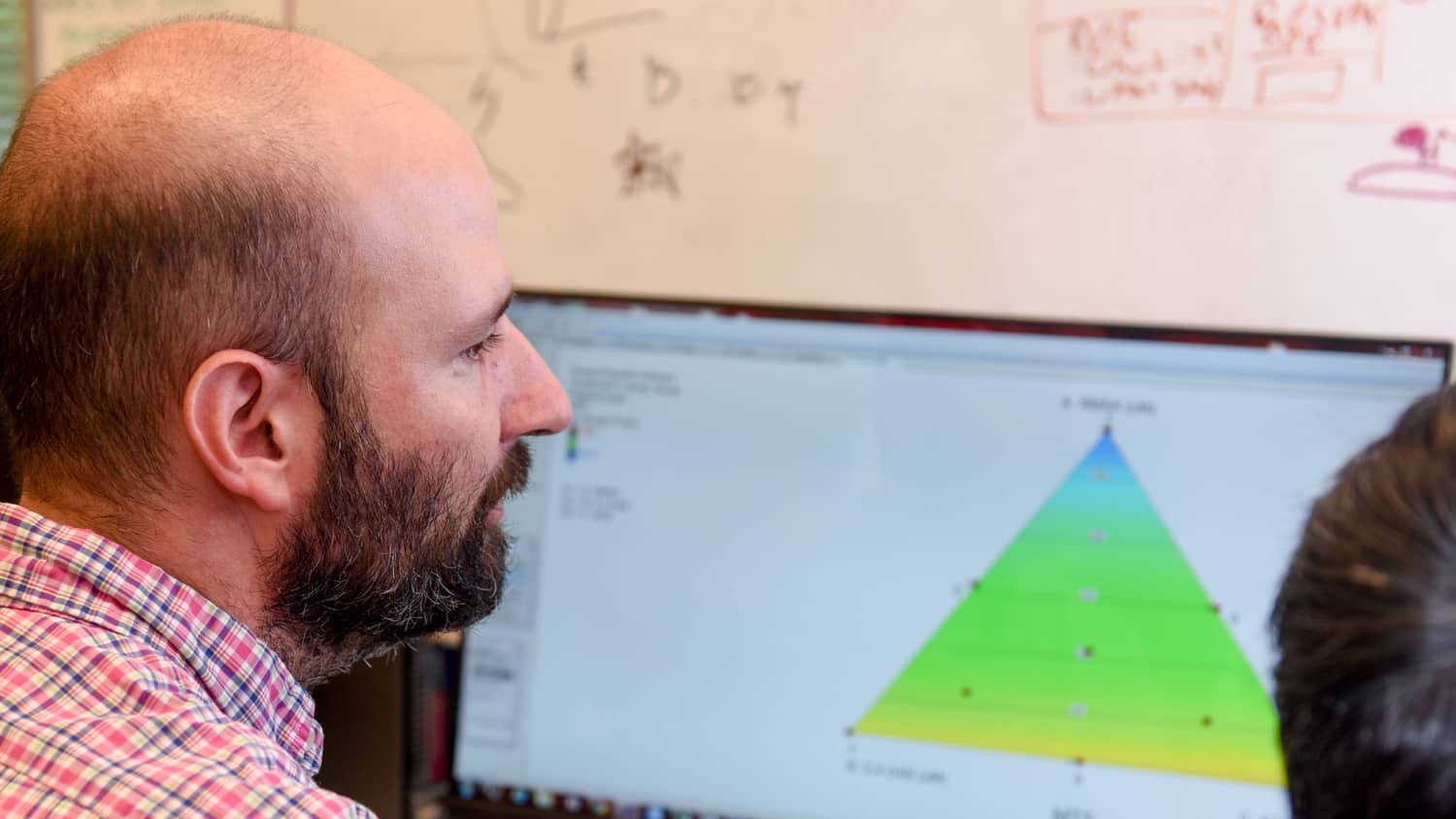 [/break_container] It’s a Tuesday morning, and Michael Bereman is in his office on Centennial Campus, poring over data on a deadly toxin found in ponds and lakes that many of us pass by every day.

He has little use of his left hand, so he uses his right hand to alternate between the keyboard and the mouse. He reads a lot — looking for causes, clues, shreds of evidence that might yield truths about a devastating disease. Then he goes next door to his lab, where his students and postdocs are gleaning new knowledge from the chemical composition of frozen fish.

What is he searching for? New information about amyotrophic lateral sclerosis (ALS), a deadly condition that affects approximately 30,000 people in the United States today.

Why is he so invested? Because his fight with ALS is personal. He was diagnosed with the disease two years ago.
[code_include id=’bereman-video’]

Michael Bereman’s Wolfpack roots run deep. He grew up in Apex, the son of an NC State professor. He completed his undergraduate and Ph.D. degrees in chemistry here.

Bereman distinguished himself as a student, according to his mentor, David Muddiman, Jacob and Betty Belin Distinguished Professor in the Department of Chemistry. “Michael immediately struck me as someone who really thought deeply about science and really wanted to make a difference,” Muddiman said. “But more than that he was extraordinarily curious.”

After graduate school, Bereman moved to Seattle to do postdoctoral work at the University of Washington. But he kept one eye on Raleigh. When he interviewed at NC State for an opening for an assistant professor on the biological sciences faculty and in the Environmental Health Science faculty cluster, “Everyone said that he was by far the best candidate that they had ever imagined applying for this position,” Muddiman said. “Being hired back into the institution into a completely different department with a very different background is a really testament to how much he grew as a scientist.”

Michael immediately struck me as someone who thought deeply about science and really wanted to make a difference.

So Bereman and his wife and dog packed up and moved back east in 2013. “It was a dream come true,” Bereman said. “I couldn’t have imagined it better.”

Then everything changed. Bereman was watching TV one night in January 2015 when he felt a twitch in his left bicep. “I didn’t really think too much of it,” he said. “It was just strange.”

Around the same time, he tried to do some pushups, and his left shoulder gave out. There was pain. Something was wrong.

Six months later — three days before his 34th birthday — he found himself sitting in a doctor’s office with his young son, receiving a diagnosis that would change his life: ALS.

Often called Lou Gehrig’s disease after the New York Yankees great who suffered from it, ALS is a progressive neurodegenerative disease that affects the brain and spinal cord. As neurons throughout the body degenerate, muscles gradually waste away.

There is no cure. The average survival time after onset of symptoms is three to five years. Only two years after returning home to NC State, Bereman found himself contemplating the end of his dream.

His doctor told him that many of his patients retire after receiving their diagnosis. “That was the last thing I was going to do,” Bereman said. “I had just really started my life.”

As he began to learn more about the disease that had invaded his body, Bereman, armed with a Ph.D., a lab and resources to conduct life-changing research, concluded that he needed to fight back.

“I realized I have a background that I think could be advantageous to this field,” he said. “So at one point I called a graduate student in and decided, ‘Let’s try to do some of these experiments. Let’s try to make a difference.’”

Muddiman, a mentor and friend whose research focuses on identifying biological markers of disease, was more than ready to help. Over dinner in California after Bereman’s diagnosis, the two discussed theories he had developed from his reading about the link between ALS and a neurotoxin found in cyanobacteria.

“Before I even got back from California, we had taken the data that we already had and analyzed it based on Michael’s recommendations, and sure enough, he was right,” Muddiman said. “From there, we just continued on this path together.”

Bereman (left) and Muddiman discuss their neurotoxin research in the lab.

This path has led the two to examine cyanobacteria blooms, which are algae-like growths on lakes, ponds and other bodies of water that often produce toxins. Studies have suggested that the presence of these toxins, which are found in the water and the fish and other animals that inhabit it, corresponds with higher rates of ALS and other neurodegenerative diseases. Bereman and Muddiman’s work is supporting these findings.

“Only 10 percent of this disease is hereditary; 90 percent is sporadic,” Bereman said. “That links itself to some environmental factor.”

“Key proteins in the brain can incorporate a neurotoxin that is produced by cyanobacteria that’s in our environments, in our drinking water,” Muddiman said. “It’s in shrimps, scallops — it’s in the food web.”

The correlation between the toxin and ALS hasn’t been definitively proven, but Bereman, Muddiman and their research teams are making progress toward that goal. Should these connections pan out, the potential is enormous. “This could end up being such a major discovery that it completely changes how we view what we eat and drink and how we prevent ALS and other neurodegenerative diseases,” Muddiman said.

Funding from the Chancellor’s Innovation Fund, NC State’s Center for Human Health and the Environment, and Muddiman’s professorship helped the researchers expand and deepen their focus, including identifying biomarkers that are diagnostic of ALS and screening drugs for treatment potential. This multipronged approach could lead to more effective treatments, earlier diagnoses and better ways for people to protect against the toxins that can cause the disease in the first place.

“Being able to work with Michael on his disease has been a tremendous motivation,” Muddiman said. “I was his mentor, we became friends, and now I look at Michael as my mentor.

“He’s always wanting to know if he can do more. It’s really inspiring.”

Muddiman decided to celebrate his colleague’s contributions by establishing the Michael S. Bereman Lecture Endowment, which will help bring innovative scientists to NC State each year to share their work with the university community. “There are some people who retire with less of a career than Michael already has built,” Muddiman said. “I want to make sure we honor Michael’s scholarship for years to come, as well as the generous, caring and genuine person that he is.”

Bereman continues to press onward, realizing that his work probably will not yield a cure in time to save his own life. But knowing that he’s playing a part in eradicating ALS for future generations keeps him going. And he continues to teach, helping prepare the scientists of tomorrow to take up the fight.

“Sometimes it’s tough, and sometimes I get down,” Bereman said. “But I just try to refocus in on the problem at hand.

“It’s a type of therapy, and the idea that I could be making a huge difference is very rewarding to me.”

This post was originally published in College of Sciences News.