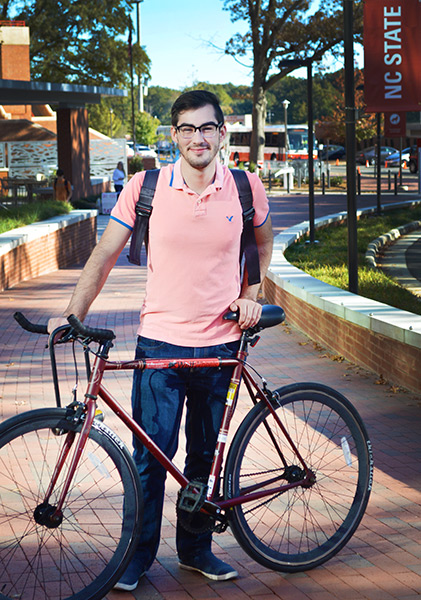 In addition to numerous involvements on campus, Sam Shain rides his bike once a week to nearby Washington Elementary School, where he mentors a student through the Big Brothers Big Sisters program.

In just his second year at NC State, student Sam Shain is trailblazing the intersection of philanthropy and sustainability.

Nearly 3,000 miles from his home in Orinda, Calif., Shain is making unique contributions to a university culture of philanthropy. As the first-ever Director of Student Philanthropy within Student Government’s Executive Board, he’s helping educate students about the importance of giving back in order to boost the university’s long-term sustainability.

“My niche is philanthropy and sustainability and finding a way of working those concepts together,” Shain said.

One way is by serving on the student-led board of the NC State Sustainability Fund, which awards grants for campus sustainability project ideas submitted by students, faculty and staff. He’s also the Vice President of the Philanthropy Council for Poole College of Management, where he additionally assists as a college ambassador.

“That experience was a great way to learn about philanthropy and get equipped with skills that are valuable in the workplace,” he said.

Shain’s interest in philanthropy began in the fourth grade when he motivated fellow children at his church to give to an annual international aid offering, more than doubling the previous year’s collection amount. Later in high school, he co-produced Performers for Progress events that used the performing arts to raise money for local and global nonprofits.

“I enjoy applying my skill sets to help others,” he said. “It is motivating to see that advocacy for a cause can create a ripple effect.”

A Park Scholar and an Alexander Hamilton Scholar, Shain studies business and international studies with hopes for a career in international business. His mom, a native of Brazil, instilled global perspective early on, leading to his fluency in Spanish and Portuguese. He began learning a third language – French – during a six-month cultural exchange in France when he was just 10 years old.

A few years later, Shain joined his middle school’s Environmental Club, where his interest in sustainability grew. There, he helped start a recycling program and later, in high school, he led an effort to expand school recycling and implement compost collection, which boosted the school’s waste diversion rate from 6 percent to 75 percent in just 13 months.

When he joined the NC State Stewards sustainability leadership program for his first year in Raleigh, he continued to promote composting, helping boost awareness about opportunities for composting on campus.

“NC State has helped me find my calling,” Shain said. “This campus has given me so much. I just want to give back as much as I can now.”