Every day 100 million people in Southeast Asia are slowly poisoned by the very well water they need to survive. In what’s been called the largest poisoning of a population in history, arsenic has contaminated water that’s vital for drinking, cooking, cleaning and irrigating crops. 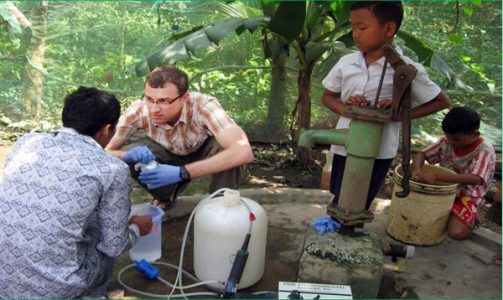 “If there are people being poisoned, we want to know and try to figure out why it’s happening,” said Matt Polizzotto, an assistant professor in NC State’s Department of Soil Science. “Soils sit at the intersection of so many societal needs. It’s what we use to protect water quality. When people drink well water, soil protects chemicals or pathogens deposited on land from leaching [into aquifers].”

As a soil hydrogeochemist, Polizzotto and his research team study the integration between groundwater and soil and environmental chemistry. He has traveled to Asia more than 20 times, researching water and soil conditions in Bangladesh, Cambodia, Laos and Vietnam.

These countries were part of the Green Revolution, which created millions of new water wells from the 1960s through today. While the wells boosted agricultural yield and reduced prevalence of infectious diseases associated with using polluted surface water, they also created an arsenic contamination problem, which Polizzotto has researched since he was a Ph.D. student.

“It’s the actual natural soil properties contributing to this problem: transfer of arsenic from soil into the water. Fundamentally our research is about what’s causing or protecting these contaminants from solids into water,” he said.

In addition to collecting data from areas with contamination, Polizzotto and his team also study areas in Cambodia not yet reporting arsenic contamination and communities in Bangladesh, where they seek to understand how rice fields irrigated with arsenic-contaminated water impact yield and quality of rice production. Together with local partners and fellow researchers, low-cost filtering solutions are being tested, including passive water treatment systems and fabrics engineered to absorb arsenic.

While arsenic contamination is most widespread in Asia, groundwater in the United States is also impacted. An estimated 43 million Americans– including more than half of North Carolinians — drink from private wells that are sometimes unregulated or not regularly tested for contaminants.

“There are places in North Carolina that have arsenic in well water,” Polizzotto said. “Arsenic’s specific chemistry allows it to move around pretty well, dependant on environmental conditions.”

Some of those conditions include human-induced triggers such as certain agricultural practices and herbicides, as well as creation and storage of coal ash. (Read tips on creating safe soil)

Another naturally-occurring trace element Polizzotto studies is manganese, which is a growing concern in North Carolina.  Roughly half of N.C. wells have manganese concentrations exceeding the state standard, impacting an estimated 387,000 people living in the state’s Piedmont area, according to a 2015 study.

“More and more studies show high amounts of manganese can cause a number of health problems. What we’re doing is exploring how many people are impacted and what’s causing this problem,” Polizzotto said.

“Our research tries to inform sustainable management of soil and water resources,” he said. “We think about, ‘How long can a water supply last before its quantity or quality change? How long can a human or agricultural practice go on until there are threats to human or environmental health?’ For me, what is sustainable is based on how long can a system function before it either can’t do what it’s intended to do or there are adverse effects.”

Learn about research progress at polizzotto.soil.ncsu.edu. Polizzotto is a member of the Center for Human Health and the Environment at NC State. Learn more at chhe.research.ncsu.edu.