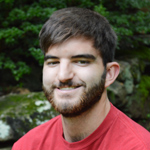 NC State University senior Brian Iezzi has been recognized for outstanding leadership and service by North Carolina Campus Compact, a statewide network of colleges and universities with a shared commitment to community engagement. Iezzi is a recipient of the network’s Community Impact Award honoring one student leader at each member school.

Iezzi is one of 21 students chosen by their campus for the 2015 honor, joining more than 200 college students recognized by the network since the award was first presented in 2006.

A senior in Textile Engineering and Materials Science and Engineering from Gastonia, N.C., Iezzi has advocated for sustainability since he arrived on campus in 2012. Iezzi has been a project manager for the NC State Stewards sustainability student leadership program and chair of the Sustainability Fund Advisory Board. He is also co-founder of an NC State bike share program and played a key role in building a shack made of 100% reclaimed material and raising over $2,000 for NC State’s Habitat for Humanity Shack-a-Thon event this year.

In addition to his community and campus involvement, Iezzi has conducted extensive undergraduate research seeking a more sustainable alternative to platinum for hydrogen generation, and he co-founded a business that researched and designed these alternatives. He currently holds a U.S. Provisional Patent as a co-inventor of this new technology, which could significantly impact the energy storage industry.

“The impact Brian has had on sustainability initiatives on our campus is quite visible,” said Rebekah Dunstan, program coordinator in the University Sustainability Office. “His leadership and dedication has been critical for the Bike Share program and the increasing success of the Sustainability Fund.”

Iezzi and other Community Impact Award winners will be honored at the Compact’s annual CSNAP student conference, held this year on Nov. 7 at the University of North Carolina at Pembroke. The event will convene nearly 100 students and staff from more than 20 campuses in the network.

North Carolina Campus Compact, the state affiliate of the national Campus Compact organization, builds the capacity of colleges and universities to produce civically-engaged graduates and strengthen communities. Started in 2002 and hosted by Elon University, the statewide network includes 36 public, private, and community colleges and universities. NC State first joined the Compact in 2002.