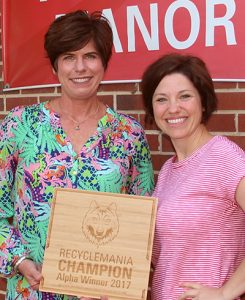 Residents of NC State’s Western Manor Apartments led the Wolfpack to its strongest finish yet in a nationwide collegiate recycling competition this winter.

The university topped a 35 percent waste diversion rate, which is a record high for NC State in this competition. The university also improved its rankings in the Per Capita Classic, which measures weights of recyclable material versus landfilled material, and in the total weights of recycled paper, cans, bottles and cardboard, as well as composted food waste.

With the ability to weigh the amount of landfilled and recycled materials at most residence halls, NC State layers a campus-based competition atop the national Recyclemania competition. Students are able to track their residence hall’s diversion rate online and challenge other residents to boost rates of recycling and composting.

“While NC State does submit all of our campus data to be ranked nationally and compare ourselves to similar institutions, our competition is focused internally. This increases awareness of the impact that your recycling efforts can have on your building’s overall waste diversion rate,” said Lani St. Hill, outreach coordinator for Waste Reduction and Recycling.

Another reason for a campus-based competition is the variation in waste measurement among universities and colleges participating in RecycleMania. While NC State uses the actual weights of campus material delivered to local landfill, recycling and composting facilities, some schools without that capability have to estimate weights based on visual inspections.

“Participating in RecycleMania is an opportunity to track our progress from year to year and to benchmark our recycling rates to similar-sized universities,” St. Hill said. “We hope that next year we can increase our waste diversion rates even more.”