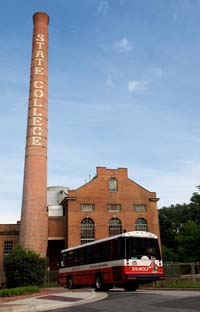 NC State has been recognized as one of the nation’s best workplaces for commuters.

NC State is among the nation’s best employers at providing sustainable transportation options for its more than 6,000 faculty and staff members.

In the Best Workplaces for Commuters’ annual Race for Excellence Awards, NC State ranked among the country’s top 29 employers for exemplary efforts to offer sustainable transportation options such as vanpool, transit and telework. NC State is among 10 universities to receive the honor.

NC State has been part of the Best Workplaces for Commuters program for several years but this is the university’s first recognition in the Race to Excellence. According to Zeringue, the award recognized “new and enhanced incentives offered by the WolfTrails commuter alternatives program, such as an expanded Zipcar fleet, the campus launch of the regional GoPerks program for university employees, an increase in benefits for Bike/Transit/Walk and carpool participants, and improvements to Wolfline service that led to a record ridership of over 3 million passengers last academic year,” she said.

Coordinated by the National Center for Transit Research, the Best Workplaces for Commuters program is open to employers that meet the U.S. Environmental Protection Agency’s national standard of excellence in commuter benefits.