During the 2017 football season, Carter-Finley Stadium diverted 42 percent of gameday waste from landfill through recycling and composting efforts.

The NC State football team’s Sept. 16 victory over Furman University wasn’t the only win in Carter-Finley Stadium that day.

For the first time in the stadium’s history, more gameday waste was recycled or composted than trashed. Instead of ending up in a landfill, more than 10,000 pounds of material was transformed into useful resources, leading to a 53 percent waste diversion rate for Carter-Finley Stadium.

“Any time we have food and fans and a lot of people in one place, we’re going to have waste,” said Lani St. Hill, outreach coordinator for NC State Waste Reduction and Recycling. “We are working to manage that waste in a sustainable way.”

Better By the Game 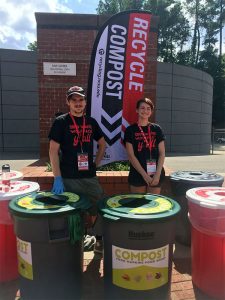 At concourse-level waste stations, fans can compost leftover food and paper-based food packaging, which is transported to a composting facility. There, the material is transformed into a nutrient-rich soil amendment that’s used in gardens and landscaping.

When Carter-Finley Composts launched in 2015, composting was only available on the concourse level through waste stations staffed by volunteers. Then, in the 2016 season, workers who clean the stadium after the game began separating compostable materials from landfill items and recyclables, which were already being separated.

That switch ‒ plus the start of compost collection in the Vaughn Towers’ kitchens ‒ helped nearly double the stadium’s composting rate, driving the 2016 season total to 8,920 pounds of compostable material and a 27 percent waste diversion rate.

In 2017, Waste Reduction and Recycling worked with NC State Athletics and NC State Dining to divert more pre-game waste from deliveries and other gameday prep. Shipping pallets, paint buckets, marketing materials and more are now tracked, collected and recycled. As more compostable and recyclable materials are incorporated into stadium operations, diversion rates should increase even more.

“Every year we come together and see how we can make the [waste reduction program] stronger and keep it rolling in the right direction,” said Derek Liles, facility supervisor for Carter-Finley. 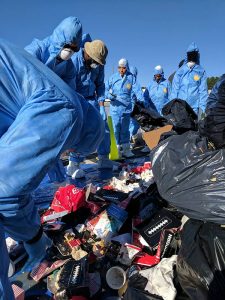 Volunteers conduct a waste audit on a Carter-Finley Stadium dumpster the day after a game. By sorting and analyzing the types of materials in the waste stream, Waste Reduction and Recycling staff can develop additional waste reduction strategies.

According to St. Hill, the program’s strength is its people: a team of staff, student interns and volunteers that make this large-scale waste diversion effort possible.

Days before each home game, waste bins are cleaned, placed, bagged and identified with signage. Student interns recruit volunteers, who manage the waste stations and ensure discarded materials are correctly sorted. On gameday, stations are placed, volunteers are trained and the collection efforts begin.

“Some volunteers go above and beyond, sorting everything,” said Mary Paz Alvarez Verde, a student intern with Waste Reduction and Recycling. “It’s amazing to see them that interested.”

After the game, it can take up to two hours to break down waste stations, collect bags and help concession vendors divert material such as cardboard and unsold food. In Vaughn Towers, chefs compost food waste and set aside unserved food for redistribution.

“At the end of the game, all the leftover food that can be repurposed goes back to campus dining halls or to local community organizations through the student-led Food Recovery Network,” said Keith Smith, who directs dining operations for the stadium.

Collectively, the Wolfpack’s waste reduction efforts inside the stadium and in the tailgating lots resulted in a 29 percent total diversion rate for the 2017 season. It’s a new record that St. Hill and others hope to surpass soon.

“We had a fantastic season, but we’re just getting started. We’re going to analyze the data and explore ways to increase our waste diversion even more,” St. Hill said. “Next season, we hope to be better than ever.”