Big data and urban sensors will drive the development of smart cities and improve the lives of most people in the coming years, former Maryland governor Martin O’Malley told a conference on Centennial Campus on Tuesday.

In the keynote address at the Triangle Smart Cities Summit, O’Malley said public-private collaborations would lead to new ways of governing and better decision-making. “We have the ability to solve problems to the degree that we never have before,” he told a capacity crowd in the Hunt Library auditorium. 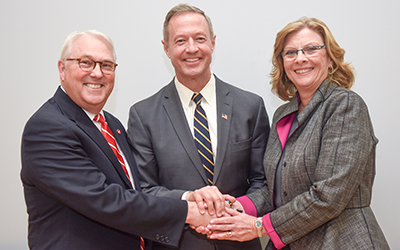 O’Malley said sensing, collecting and interpreting vast amounts of information in urban environments could lead to innovations in transportation, energy and communication. He said the connected cities of the future would be more inclusive, prosperous, sustainable, educated, mobile, healthy and secure.

The all-day conference, sponsored by NC State and the city of Raleigh, included panels composed of government officials, researchers and industry leaders.

“This is a global topic,” Chancellor Randy Woodson said in introducing O’Malley. “We can do a lot to make our cities smart. The real challenge is to make our citizens as smart as these new technologies.”

Woodson and Raleigh Mayor Nancy McFarlane pledged to join the MetroLab Network, a group of more than three dozen city-university partnerships focused on bringing data, analytics and innovation to city government. O’Malley is a senior fellow and chair of the Advisory Council at MetroLab, based in Washington, D.C.